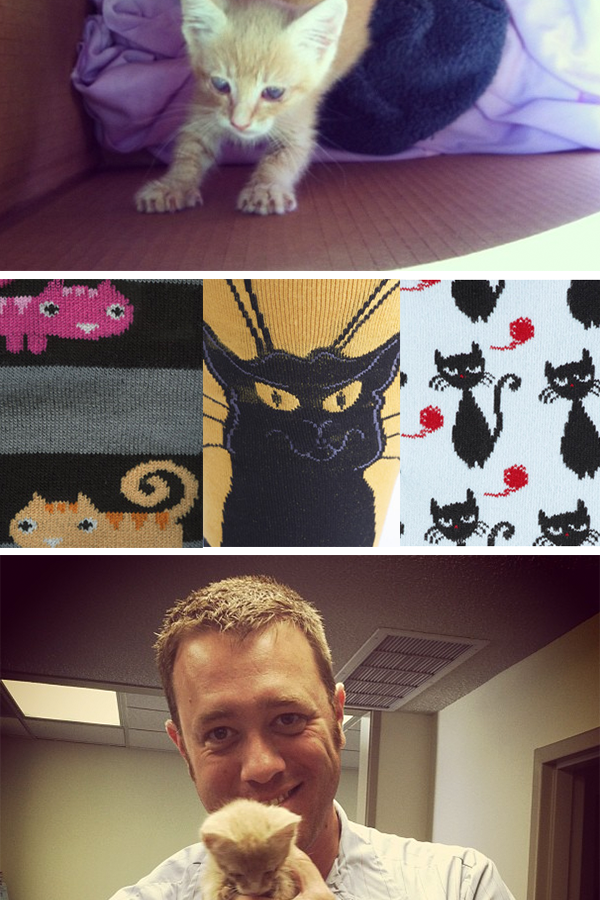 Everyone – we’re very excited for you to meet the newest member (if only temporarily!) to the Sock It To Me Team, Attica!

Attica, the most adorable kitten on the planet, stumbled onto Kisa‘s, our Shipping Manager, driveway the evening before the 4th of July. Little Attica seems to have been on her own and pretty sick

“My fiancé, Ryan, found her as he was coming home from the grocery store. Her eyes and nose were crusted over, so she couldn’t see and was having difficulty breathing,” says Kisa. “She had burrs in her fur and was pretty miserable.” They took towels and a warm, wet washcloth to clean her up as best they could – nearing the evening no mama cat could be found, so they decided to take her in for the night.

Kisa then got some goat’s milk on the advice of Michele, our SITM international sales consultant, and tried feeding her with an eye dropper. She didn’t eat much, so Kisa and Ryan decided it was time for the vet.

“Of course, it was a federal holiday, so I started calling animal hospitals. I was told at one that if I just wanted to give her up as a stray, she would more than likely be euthanized. I immediately burst into tears. How could anyone want to kill a tiny little kitten? If she was going to survive we were going to have to take responsibility for her,” says Kisa.

The vet estimated that she was about three weeks old and weighed less than 13 ounces and diagnosed her with an upper respiratory infection. After giving some antibiotics and kitten formula, the vet explained that she’d have to take her medicine every 12 hours and she would need to be fed every 2 to 3 hours. “Ryan and I took turns waking up in the middle of the night to feed our baby kitten. She started getting better right away,” said Kisa.

A what a delight! Attica immediately began to show signs of good health but still needed medicine and regular feedings, so KISA BROUGH HER INTO THE SOCK IT TO ME OFFICE!

“She immediately made best friends with Kathryn in Customer Service,” says Kisa. “Mitch in the warehouse and Alex in design always take the time to say hello. It can get pretty chilly in my office, and we were instructed to keep her warm, so I often wrap her up in a towel and let her sleep in my arms.”

Attica is almost 100% recovered! She can breathe easy, weighs well over 1 lb. and has so much energy!

“I’m so pleased to have her in my life and feel so blessed to work in a place that gives me the flexibility to take care of her,” says Kisa. “Yay for Attica and yay for Sock It to Me!”