Amy Acheson moves with a purpose. This Des Moines, Iowa underwriting consultant and mother of two started jogging with her best-friend Rachel as a means of mild exercise and to get some girl-time away from the kids. When they decided to register together for their first race, Amy had no idea how running was going to shape her future, and inspire her will to live every day to the fullest.

“We ran some short races just for fun but I never considered myself a serious runner until after my scare with cancer,” she says. “After I learned that I was cancer free, I stopped saying “I can’t.” All of a sudden the world was just full of possibilities. I decided to run a marathon. That’s when I fell in love with running.”

This isn’t to say that this marathon mom’s journey has been easy.

“My first marathon was Des Moines Marathon 2011. I cried the last five miles from pain and raw emotion. I lost two toenails and had several injuries during training that resulted in three months of physical therapy. I made it across the finish line but I felt like that marathon beat me,” she confesses. “Most sane people would decide then and there to hang up their shoes, but not me. I decided that I could do better, so I did in 2012.”

Through a high-school friend Amy heard about the Million Dollar Marathon and its affiliation with Above and Beyond Cancer.

“My friend posted information on Facebook about the marathon, the cause, and the fundraising effort, and I immediately wondered if I could do two marathons in one year. Of course the answer was yes because there is no such thing as I can’t,” Amy says proudly.

“My friend posted information on Facebook about the marathon, the cause, and the fundraising effort, and I immediately wondered if I could do two marathons in one year. Of course the answer was yes because there is no such thing as I can’t,”

The fundraising effort has placed Amy and her brush with cancer in the forefront of her social life in a way she never imagined, and in a way that isn’t exactly comfortable. She hadn’t broadcast her diagnosis or surgery with many outside of her close friends and family, and exposing the still-raw, intensely personal encounter to the world has been challenging, but also rewarding.

“Only a few months into this, and it has been incredibly healing and positive. I’ve had so many people reach out to me about their own experience with cancer. I’m so very honored to be a part of this amazing event, and humbled by all the courageous people I have met because of it.” 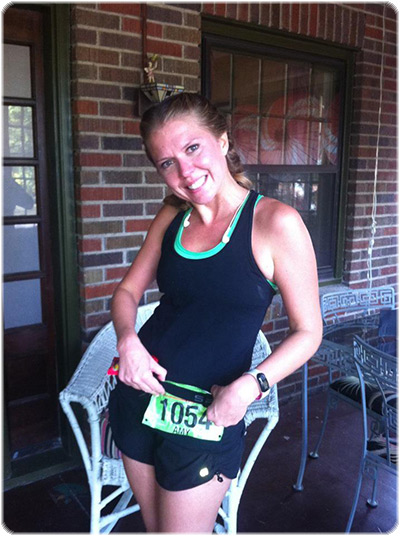 Does Amy have any advice for anyone looking to try something that seems impossible, may it be a trot around the block or a full-on race? “Enjoy the fun of trying something new without fear of failure. I believe that finding something you love is important, but in order to do that you may have to try a great many things that you don’t love. I tried Zumba, boot camps, kickboxing, weight lifting, barre, spin, and Pilates, to name a few. As of right now, my two true loves are running and hot yoga, and it just so happens they complement each other well. If you’re anything like me, it can be intimidating to try something you have never done before. The important thing is to try.”

Amy is still hoping to reach her fundraising goal for the Million Dollar Marathon, so if you could lend a hand, or your feet, take a peek: you can read her story, as well as the details about the race and Above and Beyond Cancer at https://coasttocoastforcancer.org/amy/. They’re also still looking for runners to join them on the west coast, so if you’re a California girl, Washingtonian woman, Seattle stud muffin, or just someone with some sneakers near the left coast, check ‘em out!