Catherine Qualtrough remembers looking up at the Milky Way when she was a child walking to her grandparents’ house. The rural area where she grew up, near Hamilton, New Zealand, was untouched by light pollution at the time, so scoping a celestial view while on a stroll wasn’t an impossibility.

Catherine remembers the particular moment in her childhood where her love affair with astronomy and astrophysics began. There was a school project where she studied Halley’s Comet and its return to the skies. “I was so amazed that this giant glowing snowball was speeding through our solar system and had been for hundreds of years and that by merely looking up I could see this happening,” she recalls. For weeks she dragged her parents out of the house at 3AM to stare at the sky with binoculars. Her parents could tell that their daughter had found something she was passionate about, so they contacted a member of the local astronomical society. He invited ten-year-old Catherine to look through his homemade reflecting telescope. “Again, my parents were there shivering through the night while I stood on a box and got my first look at Saturn’s rings, Mars and Jupiter’s moons. I was sold. From then on I read Astronomy magazine every month and begged my parents incessantly for a telescope,” she says. 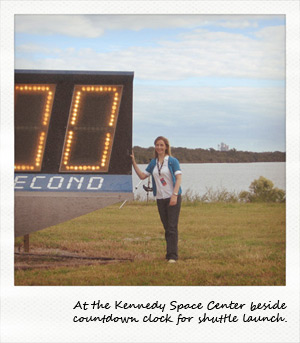 Catherine decided to move across the country to attend Canterbury University following high-school. She majored in Physics and Math, and took courses in Astronomy and Astrophysics. Ernest Rutherford, an epic figure in New Zealand and a hero to Physics, attended Canterbury as well, and he provided Catherine with a bottomless well of inspiration. Following Canterbury, Catherine won a scholarship to attend the University of Cambridge in England. “I began my Ph.D work in the “Rutherford” building of the Cavendish Laboratory at the university. Every day I was reminded of my New Zealand roots, and that if you have enough passion and enthusiasm for something, you can achieve your dreams, regardless of your background,” she says.

Her work eventually exported her to the United States, where she lives today. Catherine looks back on her path to the skies and is proud to have overcome the challenge of finding an occupation that is united with her love of space. “New Zealand’s economy just cannot support a lot of research in the areas I love,” she says. Her job in the U.S. exposes her to some amazing things, like traveling to see the world’s most innovative new telescopes and peering into the heart of the universe from the observatory. Her day-to-day work combines research and teaching with data processing, presenting results, research fund applications, and writing papers. 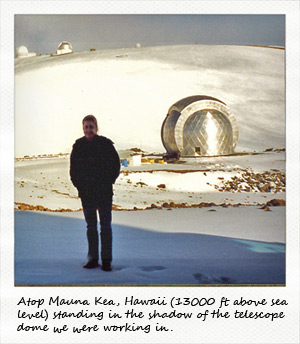 She also looks to inspire other scientists, as well as the public. “It’s the best feeling when you can explain something to someone and see that spark of understanding and interest in their eyes,” she says. It’s also important to Catherine that she helps to reach out to young people who are interested in science. She remembers how it was difficult to find other women to look up to. “I’d be lying if I said walking past walls full of portraits all of successful male figures in Physics and Astrophysics at Cambridge wasn’t sometimes disheartening. Female role models were scarce. One of my major goals in life is to help change this and to support women in the sciences,” she says.

Catherine spends her time outside of the observatory playing piano, rowing, and volunteering at charity and outreach groups. “I aim to one day write a non-fiction book about astrophysics aimed at the non-expert. I’d also love to become more involved in scientific policy making,” she says.

For staying star struck and inspiring others to become interested in astronomy, Catherine Qualtrough is a very Cool Girl!

You can follow Catherine on Twitter @CatherineQ, and you can read her blog about astrophysics, space, outreach, and science in development at www.CatherineQ.com