Like many kids who love animals, Wendy Smith dreamed of one day becoming a veterinarian. But after going to school on a military scholarship, she began her career as a nurse. After thirteen years as a high-risk labor and delivery nurse, and five years as an E.R. 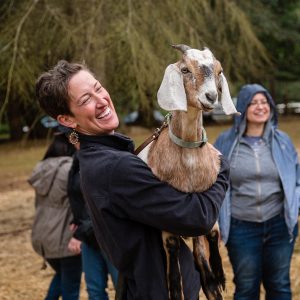 nurse at a trauma center, Wendy decided to take on a different type of triage. She’s now the director, vice president, medical director, volunteer and adoption coordinator, head of marketing and social media, lead copywriter, funding chairperson, and so much more at the animal refuge she co-founded, Odd Man Inn.

Considering her earlier life’s dream to become a veterinarian, she didn’t end up too far off, between working both in animal rescue and human medicine. “It turns out I would have made a terrible veterinarian because my beliefs about all beings having an equal right to their lives would have been a serious job hazard,” she says.

Through her position at Odd Man Inn, Wendy is a voice for the voiceless and a champion of all creatures great and small. “After we adopted Roswell, a dog with a bite history, we bought a piece of property to help keep him safe,” Wendy remembers. “Because we had space to take in more animals in need, and because we were investing our lives into this one dog, we chose to take in species who are often abused, neglected, and discarded.” 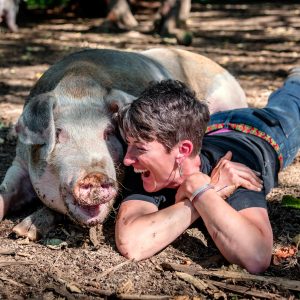 It was Roswell’s rescue that prompted them to develop Odd Man Inn into a full-scale animal rescue nonprofit based in the small community of Washougal, Washington.

“We are a farm animal sanctuary and adoption shelter and we rehabilitate animals who need help recovering from past lives, then we find them safe homes. It feeds my soul to nurture them and watch them return to health and happiness. We’ve now adopted out 275 animals in just three years.”

Every day Wendy and her team wake up to a goat named Herbie Berbie screaming for breakfast at 5AM, then proceed to feed 35 pigs individualized meals. After a full day of collecting produce donations, answering emails, messages, and social media comments, managing a volunteer crew, and tending to their residents, they serve 35 pig dinners and start prepping for the following day.

But it’s not the everyday tasks like these that make operating an animal shelter such a challenge; it’s trying to take in as many rescue animals as possible. 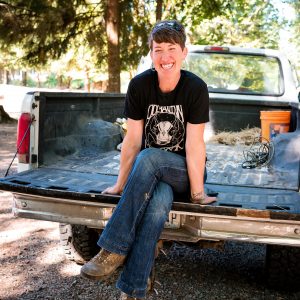 “The need for animal rescue is far greater than the number of people who are willing to take animals in and care for them,” Wendy says. “We receive dozens of messages a week asking for help with animals, and we simply cannot say yes to all of them. Our mission involves helping the animals have their voices heard while they have the luxury of our online platforms and devoted fans who are listening. We share very openly about our life here with them, which comes at the sacrifice of our own privacy. I don’t mind that so much, but I do dream of a world where we don’t have to go through such extreme measures to help animals become ambassadors for saving their own kind.”

Wendy has written several children’s books about the rescue stories of animals, and aims to publish them with all of the proceeds going to benefit the residents of Odd Man Inn. She was also a speaker at this year’s Portland VegFest, and is getting ready for SaSQUASH Art Fest, the third annual fundraiser for Odd Man Inn.

What advice does this animal advocate have for young girls out there looking to lend a hand and a heart?

“I always thought that my “job” had to be something that was also my passion. That’s not always the case. Find something you’re good at, and get paid to do that work, then use your free time to pursue things you’re passionate about, whether they pay you or not. Make your superpower your work ethic and you’ll be amazed at what you can accomplish.”

Keep track of the great work they’re doing at Odd Man Inn by following on Instagram and liking on Facebook.