As an activist and educator, pre-med student Anusha Singh believes that access to healthcare is a human right. “My passion lies in helping underserved populations and people who can’t speak up for themselves,” she says. “This is exactly why I began my work in advocacy. Advocacy has given me purpose and a mission that is greater than myself, which overlaps deeply with my passion for medicine.” 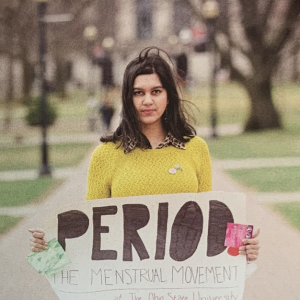 Along with several other activists, Anusha testified against the “Pink Tax” in Ohio, a special tax on feminine hygiene products. Soon after, a bill to eliminate the tax was successfully passed in the Ohio House of Representatives.

“Before testifying, I remember walking into the restroom and staring at myself in the mirror feeling a bottomless pit of self-doubt in my stomach. Questions like, ‘I am just a student. How are they ever going to take me seriously?’ and ‘How do I get a room of predominantly male politicians to care about this issue?’ spun in my head. That was the very moment where I began to look outwards and realized that my very being there is setting an example to other students who were sitting behind and watching me. After giving myself a brief pep talk into the mirror, I realized that all that mattered to me was showing the students seated behind me in the House Ways and Means Committee that their voices do matter and the power of their advocacy,” she says. 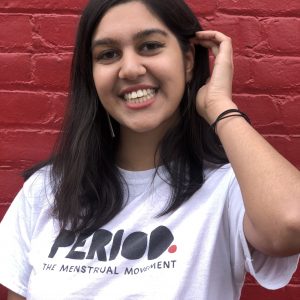 As the National Campaign Co-Director for PERIOD, the largest youth-run women’s nonprofit in the world, she strives to provide menstrual products and support to all, especially those who are underserved. Anusha initially created the PERIOD chapter at Ohio State University after researching the tampon tax. She found it to be a bit of a struggle with her school’s administration at first.

“We received all types of pushback, whether it be from our school’s administration telling us that they do not have the funds available to budget for menstrual products, although they have the funds for toilet paper, or nasty comments left under our school newspaper (which featured us) claiming that we are not standing up for ‘real’ issues,” she remembers. “The more we worked with larger institutions demanding policy change, the more we realized that the majority of pushback was rooted in the lack of awareness resulting from the stigma surrounding this issue.” 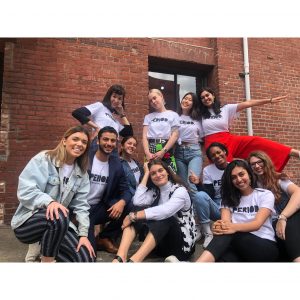 From that realization, Anusha and her counterparts decided that it was necessary to educate people that menstrual products are not merely “personal items,” but crucial necessities that are vital to female students, and everyone who menstruates. Without them, education–even going to class–is impossible.

“We worked with Ohio State University to stock free menstrual products in over 150 academic buildings with a pilot program, which recently started as well!” she says. “My experiences working on the local level has enabled me to work as the Policy Coordinator at the National Level for PERIOD Non-profit and help so many other students across the country challenge their school’s administrations and partner with their state representatives for systemic policy change. Our success has drawn upon incredible support systems and believers in the movement.” 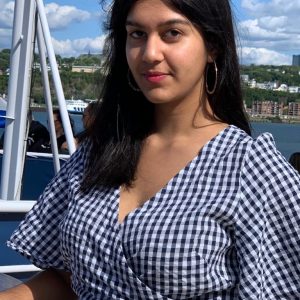 Anusha and PERIOD have chosen to push for October 19th to be declared National Period Day. It has two main rallying points of action. One: to provide provisions for free menstrual hygiene products in all schools, shelters and prisons across the country. Two: to eliminate tampon taxes in the remaining 35 states that still have them.

“October 19th is the day we hope to bring global attention to the issue of period poverty and make menstruation a much more global and mainstream issue. To get involved with the rally closest to you, be sure to check out period.org/nationalperiodday. Our goal is to hold rallies in all 50 states across the country in hopes of elevating the issue of period poverty,” Anusha says. 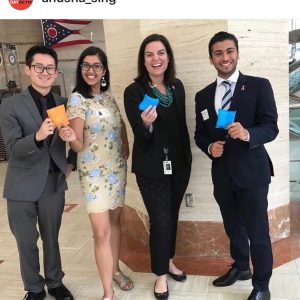 And what advice does this menstrual mercenary and brilliant mind have for young women who feel passionate about issues beyond their social circle?

“You are going to meet people who will make you feel inadequate and inexperienced, but I can assure you that your voice matters. Never underestimate the power of your voice.”