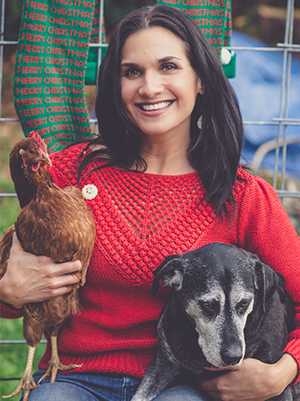 While Virginia Krakowiak may not wear a cape or a mask, this 911 dispatcher and animal rescuer certainly saves the day. Between answering emergency calls and founding the pilot project On-Call Community Rescue for Animals, Virginia spends her time aiding humans and critters alike.

The path to becoming an emergency phone operator originally came about through hard labor…literally. In her twenties, Virginia worked as a farmhand, carpenter, and bartender.

“I wanted a little more job security, higher pay, and most importantly – health insurance.  I come from a family of paramedics, firefighters, and nurses and when I saw the job posting it just seemed to make sense,” she explains.

The pedigree and her perseverance paid off, although she’s the first to tell you that it isn’t easy.

“I remember a ten-minute call where I gave CPR instructions to a man who came upon a multi-fatality rollover accident. He ran directly to the youngest and most traumatic of the patients and for 10 minutes did everything he could to save the life of a stranger, an 8-year-old girl. When paramedics arrived, they took over for him we said our humble goodbye. I then immediately took a 911 call from a woman who wanted police to do something because a particular grocery store was no longer accepting checks,” Virginia says. “I always think I’ve really heard it all, and I’m often reminded that I have not.”

The job requires putting her emotions to the side, and adapting from call to call. Over time at her job that she began to notice the need for a specific type of emergency response: animals in peril. It was from these animal-related calls that Virginia came up with: On-Call Community Rescue for Animals, or OCCRA. Virginia is partnering with several agencies and bureaus to develop this group that will dispatch rescue when the calls involve injured, lost, or otherwise jeopardized creatures. (Keep an eye out here for updates!)

“Basically, I wanted to help these agencies fill those gaps with a group of trained volunteers who would be available at all hours to respond to the calls that are left with no response,” she explains. 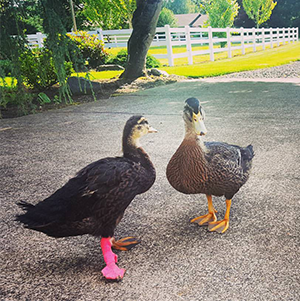 And when it comes to saving animals, Virginia’s pal Butters can attest to her talent. Butters and his brother are ducklings who found their way to her from a local feed store. Butters had been beat up by other ducklings, and his neck was weak and his leg was disfigured. She didn’t think he’d last longer than a week…but, with her care, Butters began to thrive. After six months, two casts, and loads of physical therapy, Butters is now a year old and thriving. He spends his days trying to jump on Virginia’s goats, and nibbling on all kinds of goodies like worms with her chickens.

Although her days are long and action-packed, Virginia is able to share her experiences with her Harbor Pilot Firefighter boyfriend. When she’s not working as an animal savior or 911 dispatcher, Virginia is tending to her many animals and their abodes. She’s currently trying to adopt a sheep from a local sanctuary, and adding siding to the goats’ manger.

Virginia’s biggest goal, outside of starting her non-profit OCCRA, is to focus on her work with Oregon Humane Society Technical Animal Rescue. As part of the OHSTAR team, she and other qualified members respond to high-angle rope rescue calls in Oregon and Southern Washington. 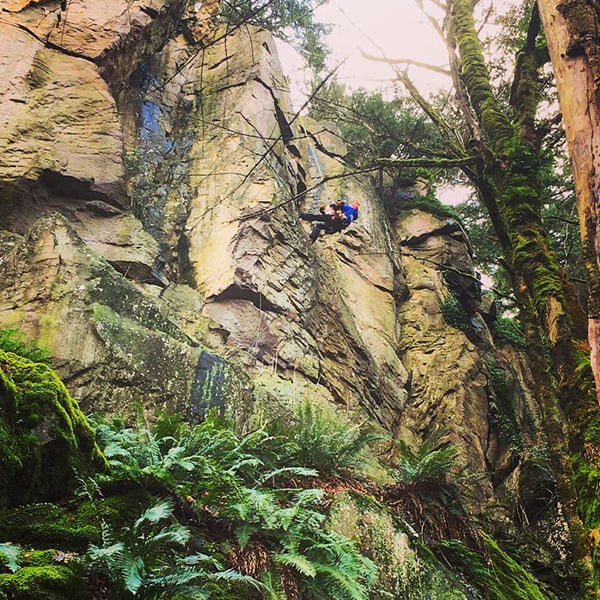 And what advice does she have to other young women looking to make their mark on the world?

“Be kind, be loving, treat people with respect and patience….try and find a way to slow down, breathe, and practice kindness.”

Words to live by! For all of her work helping animals and people, and for her tenacious dedication to bringing assistance resources to her community, we think Virginia Krakowiak is one very Cool Girl!

A $200 donation was made to Wildwood Farm Sanctuary on behalf of Virginia. You can donate here.