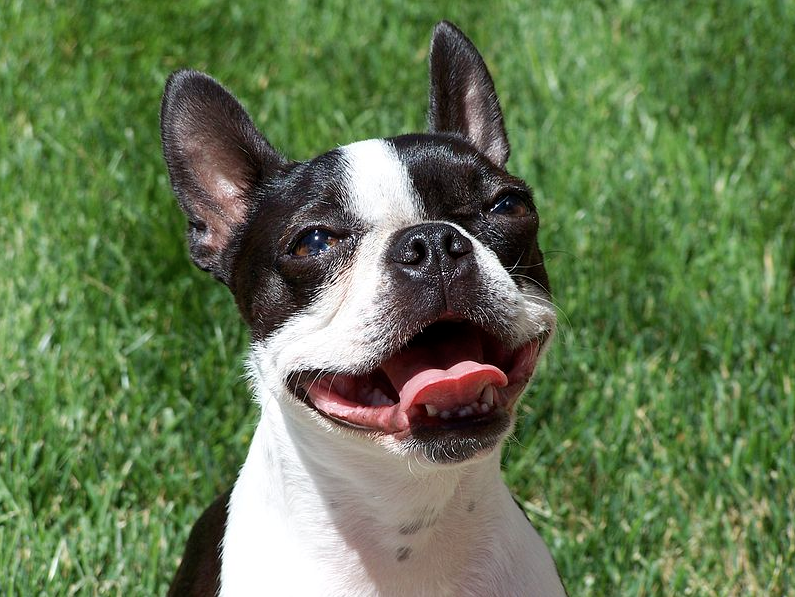 Have you been to a doggy dance party? As a human, it can be difficult to score an invitation to one of these soirees, but that didn’t stop me. I had to–it was imperative to my research for a new type of dog sock we were designing. When I heard the cool dogs were getting together to grill some hotdogs, I knew this was my chance. To infiltrate the doggy dance party, I would have to disguise myself as a friendly mastiff.

The first hour was dogs milling about, introducing themselves to other dogs, sniffing around. The croquet set was out, but nobody seemed interested in playing. A retriever and some friends were gnawing on the mallets. There was even a cat, telling anyone who would listen, “Actually, my owner says I’m more like a dog.”

Soon, it grew dark. The DJ, a Boston Terrier, put on some music. The dogs made their way to the dancefloor. This was their playlist:

“Who Let the Dogs Out?” – Baha Men – Doggy dance parties always begin with the official dancing doggy anthem. This ecstatic ode to freedom–something the dogs don’t get to experience very often–gets tails shaking and paws waving in the air like they just don’t care.

“Walk (the Dinosaur)” – Was (Not Was) – Modern dogs have no concept of dinosaurs. And since “dinosaur” and “dog” begin with the same letter, they assume this song is about walking a dog. You can’t blame them for thinking this is a song about dogs. After all, what other animal would you sing about walking? Not a frog or a hamster. Certainly not a cat.

“Sure Shot” – Beastie Boys – One of the dogs at the party said he was friends with the dog who recorded the “Rawr rawr rawr” in the intro of this song. From that point on, he was able to live off royalties for the rest of his days. He purchased a tract of doghouses for his entire extended dog family and put his grandpuppies through obedience school. That was one lucky dog.

“I Will Always Love You” – Whitney Houston – The dogs enjoy howling along to the chorus of Dolly’s/Whitney’s iconic ballad. It was quite a cacophony. This song epitomizes how dogs feel toward their masters.

“Who Let the Dogs Out?” – Baha Men – The pace slowed for the last song, but the dogs know how to pick it right up. This time, they did a conga line. I got the sense that the dogs knew the answer to the eternal question–who let them out?–but when I asked a pitbull about it she just growled. I did not press the issue, thinking my ignorance would expose me as the outsider I am.

“Roll Over Beethoven” – Chuck Berry – One weird fact you learn at a doggy dance party: every dog ever has seen the movie Beethoven. Have you? Even if you haven’t, your dog has–either at the shelter before you adopted them, or perhaps one afternoon on TV while you were out running errands. The song is about piano’s usage in early rock n’ roll compared to its traditional role as a classical instrument. The dogs don’t enjoy it on that level. They like it because it reminds them of the hilarious montage in the movie where Beethoven makes a mess.

“The Love Cats” – The Cure – I glanced over at the DJ station, but the Boston Terrier was gone. The cat had taken its place. I guess this is the song he ended up choosing.

“Who Let the Dogs Out?” – Baha Men – Dogs do not like The Cure. I guess they like their rock less angsty. Anyway, they chased away the cat and then suddenly this song was playing. Again. Every time it comes on they get really excited. I don’t know how much more I can take.

“I Wanna Be Your Dog” – The Stooges – To a dog, this is a very real and normal exploration of the emotions experienced when your master comes home from a long day at the office. “So messed up, I want you here / In my room, I want you here / Now we’re gonna be face-to-face / And I’ll lay right down in my favorite place / And now I want to be your dog.” As usual, they don’t want to consider that a song could be a metaphor for something else.

“I Know You Want Me” – Pitbull – Do the dogs attending this party know that Mr. 305 isn’t an actual dog? Pitbull himself has struggled with his doggy-ness at times.

“Woof Woof” – Dan Deacon – The pizza arrived and the dogs lost interest in dancing. Then this song came on and the energy was up again. All of the dogs returned to the floor for one last hurrah. I had no idea dogs listened to experimental electronic music, but everything about tonight has been eye-opening.

“Dog Days are Over” – Florence and the Machine – It’s 3 AM. The evening is drawing to a close. Amazingly, none of the dogs have left, but as the song comes to an end they gather around the large gate to exit the backyard.

“Who Let the Dogs Out?” – Baha Men – They stand at the gate waiting for one last thing. Of course. This song. How else could a doggy dance party possibly end? The gate is thrown open–just like in the music video. All of the dogs speed out of there. This is what they’ve been waiting for. Lights in houses all over the neighborhood turn on as they run around making a horrific barking racket.

I didn’t see who opened the gate and released them–who? Who? Who? Who? I suppose it doesn’t matter. In a few hours, the dogs will all have snuck back into their homes and the masters will be none the wiser. That’s the way a doggy dance party goes.

If you feel like throwing your own doggy dance party–or a doggy-themed dance party for humans–please feel free to use this playlist. Just make sure your guests know that it’s 100% authentic.

You’re probably wondering what this has to do with socks. Well, remember what I said about the research? Of course we made a pair of doggy crew socks inspired by my experiences.

So, if you’re ever looking for the perfect pair to wear to a doggy dance party, or if you’re looking for a pair to help you deal with the disappointment that the invitation may never come, try these on for size: Raise the Woof!