Freeland Spirits is a female-founded, owned and operated craft distillery in Portland, Oregon. Part of its success comes from the childhood friendship between founder Jill Kuehler and sales manager Jesse Brantley. Some of it comes from Molly Troupe, Freeland’s Master Distiller and a lifelong chemist who earned a Master’s degree in Distillation in Scotland–the home of malted barley liquor. But maybe the real source of their mojo is the name Freeland, which comes from Jill’s meemaw (Texan for grandmother). No matter where the magic comes from, Freeland Spirits celebrates the bounty of Pacific Northwest and the friendships that are forged between women.

In 2017 Freeland began making Freeland Gin.  Born in a traditional copper pot that combines juniper and other botanicals,

the small-batch spirit tastes as nuanced as the natural ingredients that comprise it. One year later, they started making Freeland Bourbon.

“It all started over a fateful night of drinking whiskey with my friend, Cory Carman,” Jill recalls. “I said, ‘Who grows this grain? What’s their story?’ She said, ‘I’ll grow the grain if you make it’ and here we are.”

That’s not to say that the journey from idea to actual alcohol wasn’t fraught with the typical struggles of a small business–let alone one with women at the helm.

“Women receive less than 5% of small business loans and less than 2% of venture capital money,” Jill explains. “Needless to say, raising capital was a massive challenge.”

Jill wasn’t alone, at least; her family, her daughter, her co-founders, and her advisors always had her back. But there were more hurdles to clear than just finances. There was location scouting and acquiring all of the equipment–not to mention all of the legal hoops you have to jump through when you intend to start manufacturing booze. And, of course, hiring the right people.

“I heard about this mythical distiller in Bend, Oregon, who had a Master’s in Distilling from Scotland. I went out there and threw 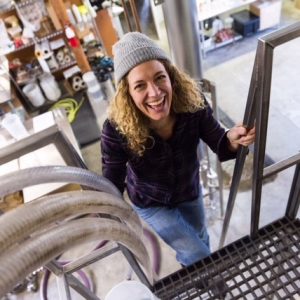 Molly over my shoulder and brought her to Portland,” Jill jokes. “And Jesse Brantley, our Director of Sales, and I grew up down the street from each other in Irving. Our first babysitting business was a failure so now we’re trying to correct past mistakes.”

Since assembling the Freeland team of genius grog goddesses, Jill and her company have taken Portland and the Pacific Northwest craft spirits scene by storm. To celebrate their first year anniversary, Freeland released their first canned cocktail. They’re still currently in the process of perfecting their future Freeland whiskeys. But she’s not stopping there.

“I want to support other women on their entrepreneurial journeys,” Jill says. “So many women have supported me and I can’t wait to pay it forward. All the lessons I’m learning I hope to share and help pave the way for more women in leadership.”

Beyond putting in the hard work, what advice does Jill Kuehler have for young women who have an idea that seems so crazy that they just can’t quit?

“Fear is not a bad thing. It often means you’re on the right track. Embrace the fear,” she says. “And build up your troop of gals around you,” Jill adds. “Support each other. Lift each other up.”

For her spirited spirits, entrepreneurial enthusiasm, and intoxicating intensity, we think Jill Kuehler and her Freeland Spirits team are very Cool Girls!