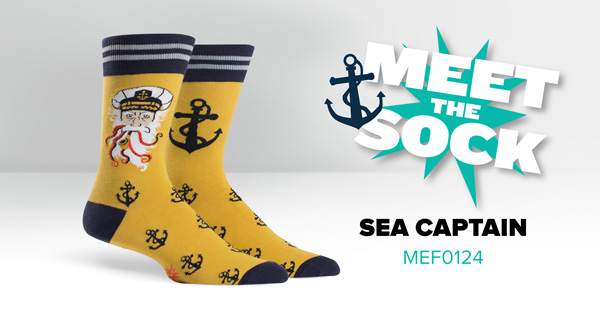 It was difficult to understand him with all those tentacles and that pipe in his mouth, but we’re pretty sure this is what he said:

Sea Captain: Anyone worth his salt only has one shoe to fill ’cause the other one’s a peg leg.

Sea Captain: I once stared the beast himself right in the eye, and he didn’t swallow me whole. That moment, I realized I was a bit of a kindred spirit with the ol’ kraken. So don’t cross me!

Sea Captain: I tol ya! Any true seafaring fellow wouldn’t need a PAIR!

Sea Captain: The Sea at midnight. Everything still. Everything calm. Just waiting for that storm you know’s a’brewin.

Get a taste of that salty sea air on your landlubbing legs with men’s crew Sea Captain.