Allyson Lister grew up fascinated by space. But unlike most kids who dream of becoming an astronaut, Allyson was more specific, hoping to one day become a doctor in the cosmos. Perhaps her natural inclination to lean towards something that united both science and technology was a sign of what was to come. “Once I was old enough to understand what biology was, I realized that’s where my interests were,” she says.

Growing up in Monterey Bay, California, Allyson grew up playing on a Commodore 64, a Nintendo Entertainment System, and an old IBM computer. Her mother instructed her on the art of typing, and her father taught her how to write simple programs, including how to print out her name over and over again under DOS. Her parents’ encouragement stoked her love of technology, and these early computer systems lay the groundwork for her future interests.

Allyson’s love of biology also started young, after she received a Christmas gift of a microscope. “Mr. Clark, my biology teacher in high school, was one of the greatest inspirations to me, and solidified my interest in the science,” Allyson reveals. “It wasn’t until graduate school, and my Masters in Bioinformatics, that I realized I could combine my love of biology with the capabilities of a computer.” 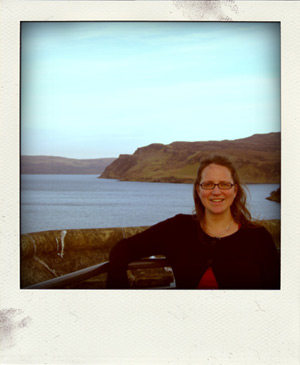 Today, Allyson’s job is to cultivate useful, precise communication when it comes to biological data. If data can’t be cohesively described and shared, it’s ineffective. So Allyson uses something called ontologies to help researchers to be able to work together and speak a common language when it comes to that data. These ontologies also help computers process and analyze the same information. She also uses the Internet and social networks online in order to share the latest research and news with the scientific community as a whole.

For Allyson’s work, communication is key, and ontologies are like the key-ring. “To ensure everyone is talking about the same thing, you build ontologies and share them, creating a common basis of understanding,” she explains. “You can build an ontology of whatever topic you want: cars, movies, biological pathways. They’re what dictionaries or thesauri dream of being: ontologies define words by relating them to other words, and by placing constraints on those relationships. They’re used to precisely describe data with the aim of preventing misunderstandings, either by humans or computers.”

Outside of work, Allyson is an avid swimmer who also knits and enjoys geocaching, hiking, and computer games. She has also worked with a variety of educational programs, including some that have given her the opportunity to explain bioinformatics and genetics to elementary school students.

With such a large amount of data in the world, and thousands of researchers adding to that huge pool of information every day, Allyson’s expertise is in high demand. She spends much of her time in front of her computer, creating experiments and analyzing data that will further enhance new concepts in biology. “Facilitating the communication of scientific data is key to the advancement of science, and it is a integral part of doing science that every researcher should think about,” Allyson says.

For proving that ladies can kick butt on a computer while being in the scientific sphere, we think Allyson Lister is a very Cool Girl!

If you’re interested in learning more about ontologies, check out the article “What is an Ontology?” More information on open access and open data for science can be found at https://creativecommons.org/science and https://cameronneylon.net/