Jesse Lil’ Wolf Gregory is a bodacious BMX biker chick and she’s only eleven years old. This California native has two-wheeled dreams of going pro when she’s a grown-up, along with becoming an Olympic gold medalist…and a dog trainer!

After picking up BMX at the ripe age of eight through a friend at the Y, she took her little pink S&M pit bike to compete. “I loved it! I started winning,” she says. “My dad bought me a Supercross and had it anodized pink and black. It was awesome. Last year Phoenix Pro Cycles asked me to be on their team. I ride a pink Phoenix Talon and a purple Phoenix Talon cruiser.”

Pink, purple, and gold all over, Jesse looks up to a bunch of extreme sportsmen and sportswomen. She adores Shawn White “because he does multi-sports and he’s good at all of them.” She also thinks that BMX maven Dani George is amazing for breaking the barrier in the sport. “Not many girls are as good as she is,” she says. Oh, and don’t forget fellow BMXer Maris Strombergs. “He is awesome, and super nice, and he gave me his jersey after a race,” she adds. 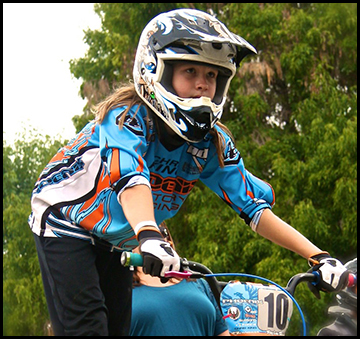 Being in junior high cuts into Jesse’s BMX time considerably. She has loads of homework to get through before she can hop on her scooter or hit the track. When she’s not getting down and dirty on her bike, she likes to play with her dog, snowboard, swim, and eat sushi. “I hate not doing anything,” she says. It’s that energy that’s made her a winner on and off of her bike.

In the future she wants to work with the handicapped, and train dogs, but for now her sights are set on simple things, like winning the Olympics and clinching the number one National Age Group for BMX. “Last year I ended up tenth, and this year I ended up eighth. So I’m getting better,” she says.

What advice does Jesse have for a girl who wants to get into the guy-glutted world of BMX? “You should try it. And don’t give up. We always need more girls. You have to try hard and don’t worry about crashing. My mom always says, if you crash, get back up…and cry after the finish line. Haha! But really, crashing sucks so just don’t do it. Never give up!”

Great advice, Jesse! Good luck to you and Phoenix Pro Cycles. Anything else that you want to share as Cool Girl for January? “I also want to shout out my mom and dad for all of the time and money they spend so I can do what I love.” Got it. Thanks, Jesse’s mom and dad, for making her one very Cool Girl!