Happy Birthday to us!

It’s hard to believe, but Sock It to Me has been around for six grand years now. SIX! Even though I know the story of how it all began and where we came from, I am still wowed when I hear Carrie’s stories of the “olden days,” when she literally did everything herself. When I say everything, I mean everything. From purchasing to packaging, including boxing up orders and writing out shipping labels by hand, Carrie saw every order from start to finish. It’s a great story… so great, in fact, that we decided to share it with you.  🙂

It all began on October 4th, 2004, when Carrie returned from South Korea with two suitcases of socks and a plan. Her start-up plan was to sell at the local Saturday Market in Portland. With its well-loved collective of local and import goods, and its central location along the train tracks in Old Town, Carrie invested in a tent and a table, ready to take on some traffic.

We found a picture of Carrie’s very first day at the market – her first day of sales ever: 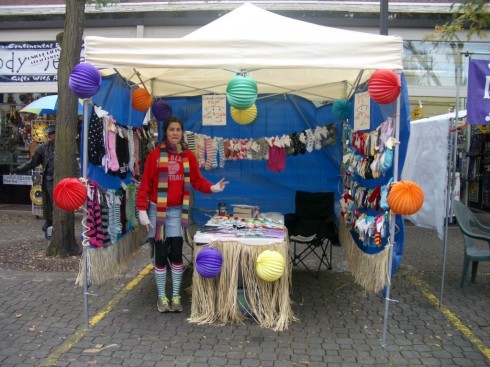 When I see where SITM is today, it’s hard to believe that she did this for several years, setting up and tearing down… rain or shine. In the midst of it all, she found favor among Portland. It was just enough favor to encourage Carrie to approach a hip boutique on Hawthorne Blvd called Naked City. She laughs about it now, saying she very awkwardly asked them about selling SITM socks. But they agreed (naturally) and became her very first wholesale customer.

Now Sock It to Me has hundreds of retail customers across the globe, but I love that Carrie started from such humble beginnings. You hear that phrase all the time, but I guess I better understand it now. She really built this business from the ground up.

Today, when you look at the website and see photos of the socks, they were photographed on a manaquen leg by a real photographer. But back in the day, Carrie used to lay out the socks on her kitchen floor, and shoot in-home snaps from her point-and-shoot (with Rocko’s help, of course): 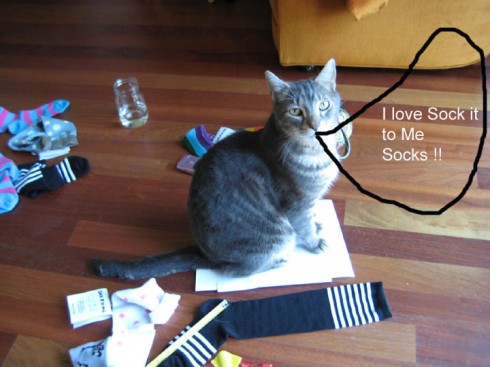 That’s about when I moved in with Carrie. We both worked from home, and while she would take orders for Sock It to Me, I would write and research… both of us cozied up in our jammies and slippers, often spazzing over Carrie’s cat, Rocko. “Look at him, look at him!” Carrie would squeal. And I’d coming running over to ooh and ahh over his cuteness, all tucked into a drawer of her desk or curled up in the recycling bin. 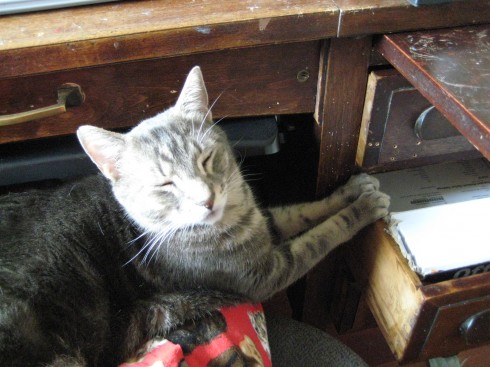 Yeah, we were a bit consumed with Rocko’s adorableness. My mid-day breaks often looked something like this: 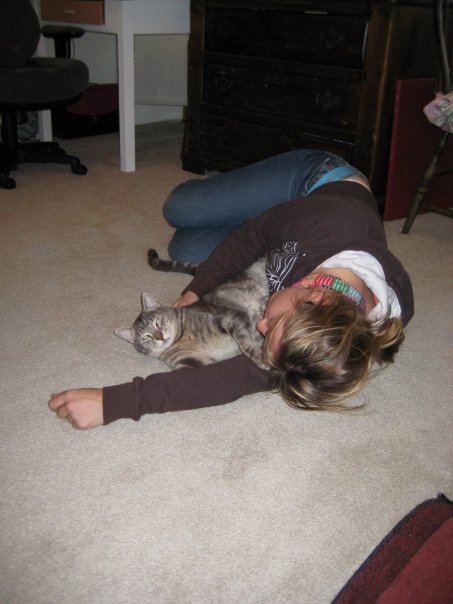 When Carrie landed her largest ever customer, she took a photocopy of the check (priced over $47,000) and realized it was about time to search out an actual warehouse space… in lieu of cramming it all into her single-car garage, which stored hundreds and hundreds of socks lined floor-to-ceiling. 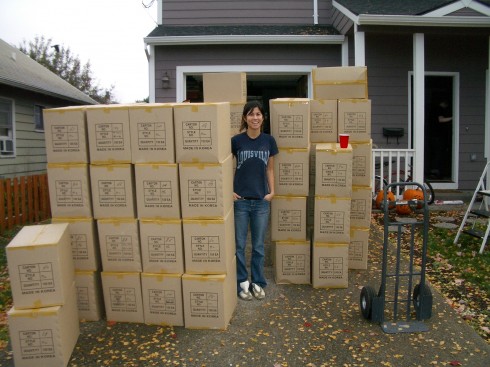 As luck would have it, she found a warehouse just a mile from her home. So the transition began, and Sock It to Me moved into its first professional venue. As popularity grew, so did her product. It didn’t take long before she had to move into a larger warehouse space, then a third larger space. As she collected more employees, she saw the need for an office, as well. So she rented an office space adjacent to the warehouse space, called a graffiti artist to doctor up the walls, and viola: Sock It to Me headquarters were born.

Right about then, she sold her Saturday Market tent and started showing at more trade shows. All of the sudden, Avril Lavigne’s stylist was calling and Janeane Garofalo was seen sporting SITM Ninjas. Not to say it happened overnight, but suddenly… success. It wasn’t a secret anymore. People knew. 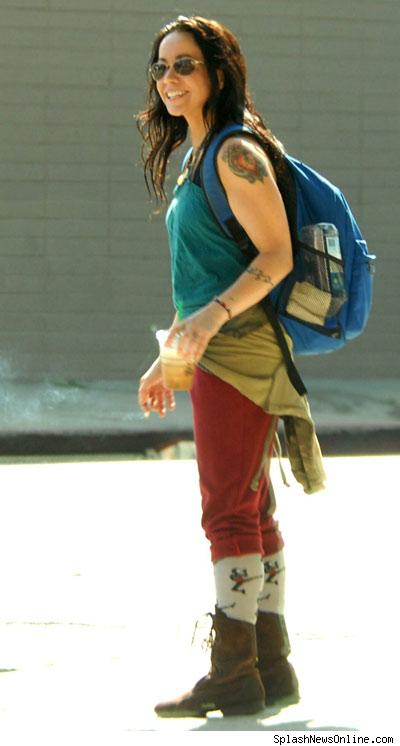 From there, Carrie’s customer list grew – nationally and internationally – so she started running an annual Design-A-Sock Contest to include the local fans in on the glory. After all, it was Portland who first loved Sock It to Me, and Portland who helped SITM grow. Now the annual contest draws a thousand-plus Portlanders each year, all vying for the $500 Grand Prize and their design’s inclusion into the line-up of Sock It to Me styles on the market. With a nod to Portland coffee culture, this year’s winner rocked our love boat, for sure: 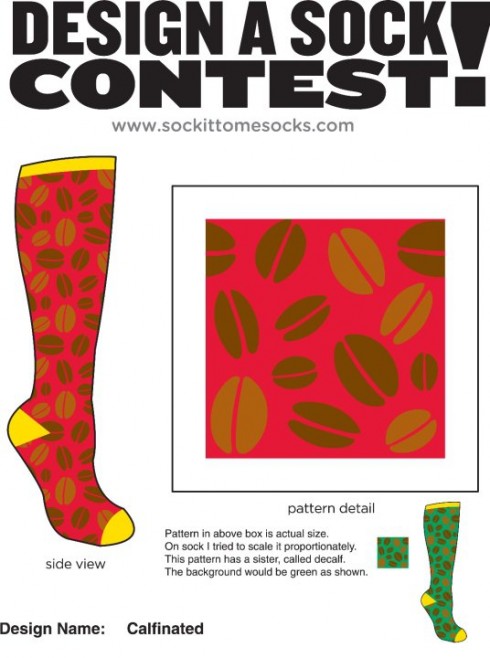 All in all, it’s been quite the journey for this Portland-based biz. It’s gotten even sweeter within the last two years, as we started doing some fun new events, like a super spontaneous Knee-High for Haiti rollerskating benefit… 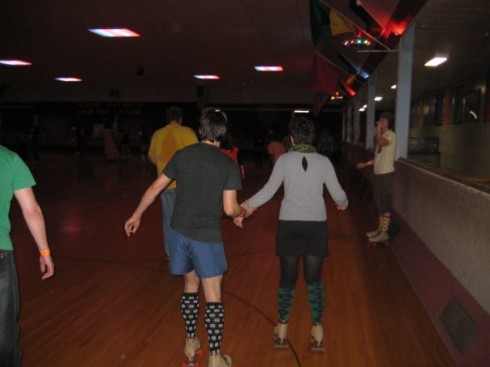 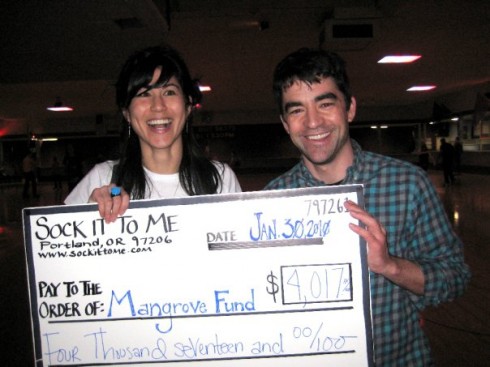 …and then our first-ever fashion shoot at Buffalo Exchange… 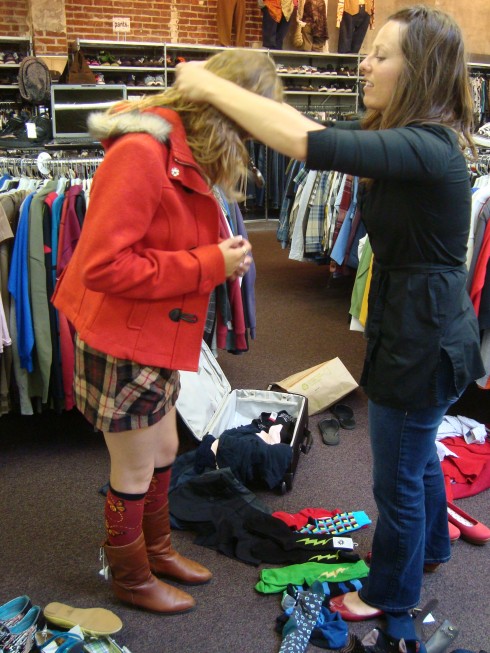 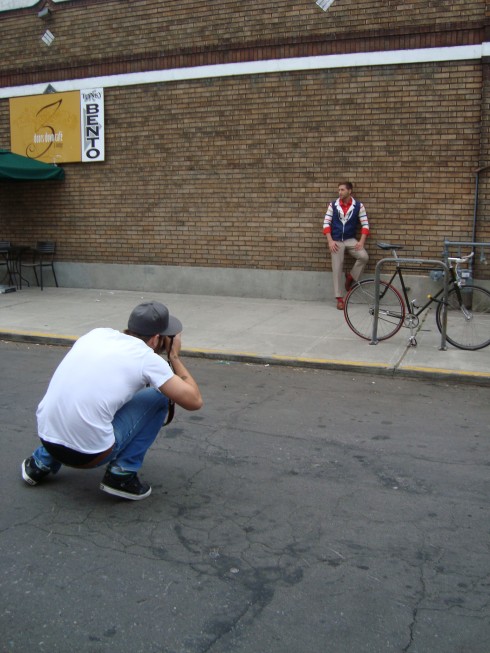 … and that pretty much brings us to the present. Of course, there is so much more to the story. After all, it’s been an exciting six years. Above all, myself, Carrie and the SITM gang all thank you for joining us in the journey! We hope you celebrate with us as the years go on. xoxo