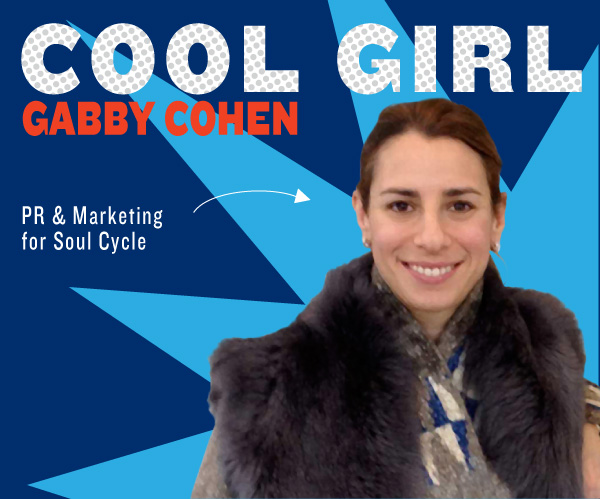 Gabby Cohen puts the pedal to the metal…stationary bike pedal, that is! This mom and PR maven is the force behind SoulCycle, whose exceptional bi-costal spin studios have motivated gym newbies and elite athletes alike!

Although she was always active, spinning wasn’t the first thing that came to mind when Gabby thought of breaking a sweat.

“I hated spinning…until I tried SoulCycle!” she explains.

For anyone who has even heard of the brand, this makes sense. While group fitness classes can often be intimidating judgment-and-spandex-filled rooms, SoulCycle is different. Their welcoming and empowering classes feature dimmed lights, bumping tunes, hilarious instructors, and a feeling of community. The ‘rides’ are fast-paced and feel more like going to a party than going to the gym. And when it comes to Gabby’s current routine, the spin classes that she got hooked on are part of her workweek…an added bonus!

“I try to visit a different studio every morning. Generally, I will take a morning class, check in with riders, and then head to the office,” she says. Her natural attention and compassion to the people who attend their classes are what make Gabby’s job much more than just a daily grind. Not to mention that she understands what helps to keep butts on the bikes.

“Exercise should be fun, something you look forward to,” she says. “Find something that brings you joy and you will stick to it.” Great advice for anyone looking to start breaking a sweat!

Other than spin class, Gabby’s daily life is packed to the gills with task-mastering, technology, and, most important, family.

“I get up with my kids, early, like 6AM…and have coffee the second I get up! I hang with the kiddies and then head off to SoulCycle,” she says. Once in the office, it’s anything but boring. “Meetings, laughing, meeting, meetings and a little more fun. Oh and EMAIL. Lots of emails,” she explains when asked to describe a day at the office.

After work, Gabby heads home to spend time walking the family dog, Juno, and winding down with her husband and kids. Because of how busy and demanding being a PR representative for such an energetic, action-packed brand can be, it makes sense that the biggest challenge that Gabby has faced has been figuring out that she shouldn’t push herself to the point of burning out. “I’ve had to learn that I don’t have to do everything. It’s okay to say no,” she says.

And what makes such a potentially hectic job so fulfilling? “You get as much out of the job as you put in,” Gabby says. “The founders are incredibly inspiring, hands-on, and dynamic. It’s an honor to work with them every day!”

For being the force that brings SoulCycle into the public eye, and for inspiring girls out there to support one another in their fitness goals, we think Gabby Cohen is a really Cool Girl!