Jessica Fragoso looks before she leaps…out of planes at 13,500 feet! This multi-talented skydiving TV reporter is remarkably down to earth for a woman who spends almost as much time in the clouds as she does on the ground.

On Memorial Day Weekend of 2010, Jessica profiled a fallen soldier named Michael Tarlavsky. An adventure-loving Army Captain who was killed in Iraq in August 2004, Jessica was inspired by Michael’s courage to take her first skydive.

After that first taste of sky, she knew she had to jump again, and quickly started training at Skydive The Ranch in Gardiner, New York. The skill of the Scarecrow skydiving team stoked Jessica’s ambition, and she decided she would do whatever it took to train and compete at a national level within a year. Ever since then she’s been regularly training at a wind tunnel at SkyVenture in New Hampshire, under the guise and mentorship of Scarecrow national competitor Rob Antalocy, who soon became her teammate.

“Rob has been such an inspiration and I couldn’t imagine having anyone else by my side,” Jessica says. “His hard work, dedication and love for the sport is truly inspiring…and he’s extremely talented.” 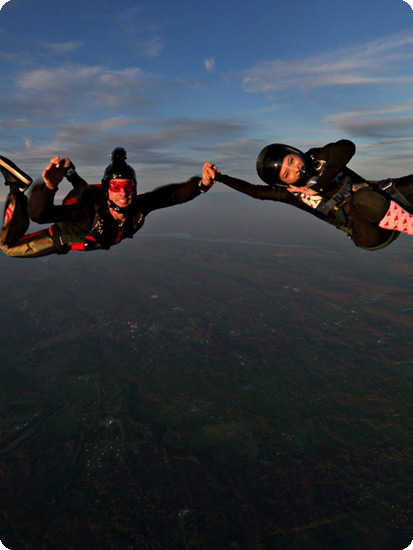 Jessica now has completed over 300 jumps and her team has just completed the 2011 United States Parachute Association National Skydiving Championships in Arizona. “We joined 500 of the country’s finest and most fearless aerial athletes, all competing for gold in their events,” she gushes.

Jessica and Rob were set to compete in the artistic event of freestyle jumping, which is like an aerial ballet with a routine performed during the freefall. “I’m the performer and Rob is the camera flyer who captures and presents the performance,” Jessica explains. “Our team is judged by the video. Our team was called Team Wonderland, inspired by the adventures of Alice in Wonderland. Through our flying we wanted to take people on an exciting, topsy-turvy adventure into our magical and mad world!”

Unfortunately, the madness of an upside-down adventure became a little too real. “On competition day, Rob got sick,” Jessica explains. “He had a double ear infection and sinus infection. He tried to jump that day, but after a few jumps he had to go see a doctor.”

But all wasn’t lost. “Two people stepped in to help me,” Jessica continues. “Former freestyle gold medalists, Karl and Merriah Eakins. Karl stepped in to shoot my video.”

They did seven rounds that day, and finished 4th out of 6. “I was really happy with the results,” she says. “Karl and I just went out there and had fun!” Two days later, Rob and his team finished the competition. “It was incredible to see the team finish,” Jessica says. “It took such dedication and heart, which is exactly why these guys inspire me.”

From April through November, Jessica takes to the sky almost every weekend that weather permits. When it’s inclement out, or during the winter, she’ll often take jumps in a wind tunnel. “I sometimes drive 3 ½ hours there and back in one day, just to get some training time in the wind tunnel,” she says. 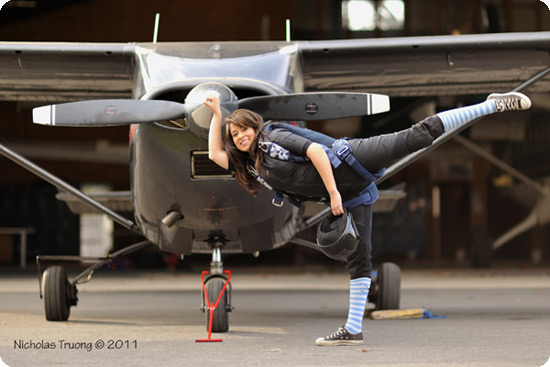 Jessica’s goal is to push her limits. “We’re all in this sport for different reasons,” she explains. “For me, I like the competitive side. This has also become one of my creative outlets and I just love it! I can’t imagine my life without skydiving now.”

Beyond her aerial acrobatics, Jessica enjoys trapeze flying, dancing, indoor rock climbing, yoga, learning about wines, and hanging out with her Chihuahua, Peanut.

For never giving up and for setting her limits beyond the sky, we think that Jessica Fragoso is a Cool Girl!