Hailing from Springville, Utah, ten-year-old Sage Mortimer is the toughest straight A student you’ll ever meet. This pint-sized wrestler is the only girl her age to hit the mat in her weight class, and is one of only a handful of girls in Utah to even wrestle at her level. Inspired by her wrestling coach dad and her brothers, Sage took to the sport back in November of 2011. These days she practices with the boys, and wrestles on a National level, furthering the Mortimers’ legendary status, being the first family to all take first in the States with her two brothers. “That’s never happened before in Utah,” she says.

During the week after school, she hits the books, and feeds her horses, pigeons, chickens, and her dog. In the evening she practices and then, on Fridays, she wrestles Greco-Roman style at tournaments. “Saturday mornings I wrestle Freestyle and Folkstyle at tournaments,” she says. “I usually get about nine matches a weekend.”

When she’s not studying or preparing for matches, Sage hangs out with her friends, bakes, rides horses, and plays forward on her elite soccer team. Her other interests are just as impressive, and include riding sheep and steer in rodeos. “Sometimes I like to just chill and watch TV,” she adds. 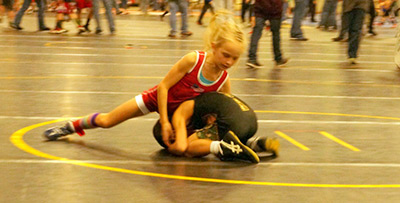 Her long-term goal for the next decade or so is to score a scholarship to further her education. “I hope to wrestle in college and in the Olympics,” she says. “Wrestling was recently voted out of the Olympics, and this makes me sad. I’m hoping that we can get the IOC to change their mind and put it back in. I’m working hard now for the chance to be an Olympian like my idol Leigh Jaynes.” She really hopes that the IOC reverses their decision so that she still has the opportunity.