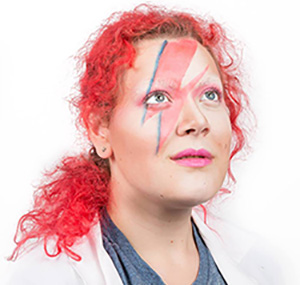 Paloma Fautley can do the robot better than most of us…literally. And her machine love was an affair that started in her formative years.

“I got into robotics through my high school robotics team. I was in a robotics competition called FIRST Robotics which is For Inspiration and Recognition of Science and Technology. We had six weeks to design, build, test and ship a robot that would play a game. The game changed each year and one year we got the Regional Engineering Inspiration Award for our robot’s design which sent us to Atlanta Georgia for the national competition. After that I was totally hooked and wanted to work in engineering forever. Now I am most excited by robotics that mimic biological movement and I hope to build prosthetics that can reasonably mimic human and animal movement,” she says. And she’s definitely put that passion to good use, creating robots that are able to do things on their own! 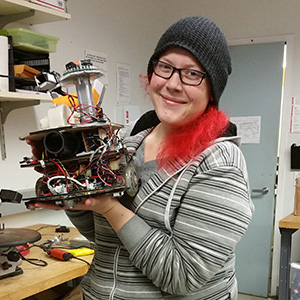 Paloma studies Robotics Engineering at UC Santa Cruz where she’s taught the nuances of engineering robots beyond just the mechanics of a machine.

“Last fall I took Mechatronics. In this class we were asked to build an autonomous robot that would complete a series of simple tasks. This means that the robot had to do a bunch of stuff without messing up and with no help from any humans. We had six weeks to build it and it was six weeks of madness, but in the end we finished with a pretty decent robot and a remaining sliver of sanity. The bots had to drive themselves to a loading station, load themselves with ping pong balls, locate another bot, hit it twice, find a special location that was emitting a magnetic field and then stop all without going out of bounds or messing up. Basically we made autonomous robot warriors that fought to the death. It was a blast.”

And yet some kids think school isn’t fun! Beyond her studies, Paloma has been a part of Maker Media, but when you ask her what Maker is, she replies with what sounds like a riddle.

“A Maker is someone who makes things. And yes, that is intentionally vague.”

But…what about those people? Any more details that can be disclosed?

“The Maker Movement is a movement filled with people who like the feeling of making things themselves instead of just receiving them. They are a creator and not a consumer. They are awesome people that aren’t afraid to play with fire and electricity. They embrace failure and seek innovation. I am a maker because I craft, tinker and build whenever possible. I would encourage any other cool girls out there to look into this movement as a way to find a supportive community that embraces the pursuit of knowledge and skills.”

What an incredible and intense idea, tons of young girls arming themselves with imagination and any number of tools to create their own things! 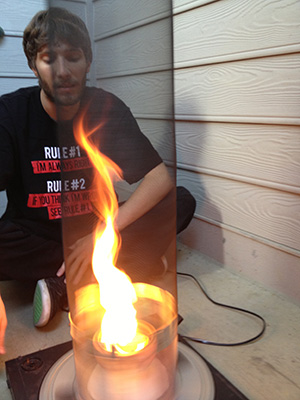 Paloma has channeled her ingenuity not only into concocting cool gizmos or building bots, but has also written articles for Make Magazine and done work for Maker Media including crafting a fire tornado out of a record player, showing off her skills at costume makeup both in real life and online, fiddling with molecular gastronomy, and interviewing Buzz Aldrin and Reggie Watts.

“The best part of working there was being surrounded by people that I found so inspiring and amazing and it just made me want to work harder and make more cool stuff,” she adds.

Beyond going to class, studying, feeding herself, and the occasional all-nighter for projects, Paloma has been the co-chair of UCSC’s student branch of  Institute of Electrical and Electronics Engineers, the largest engineering society on the planet.
“The IEEE is a gigantic organization that sets standards in computing and their members are some of the biggest and brightest innovators in the electrical realm,” she explains. “We attend their events and conferences, but we also provide workshops and support for our fellow Engineering students. This Fall we’re organizing a conference celebrating creativity in technology which is a brand new event for us. We hope it goes well.”

We do too, Paloma!

Beyond her own life, she hopes to share her excitement for STEM issues and industries with others.

“I would say that it is our job as women in STEM to reach down and offer a hand to the women that follow us, and I hold this philosophy very close to my heart. If I learn or accomplish anything I want to make sure that I share my journey and offer advice to anyone else attempting that task in hopes that it makes it a little easier each time,” she says, challenging the next generation of young, techy girls to rise above the inevitable obstacles they will face. “Any time you find a wall just ask yourself, ‘Do I want it enough?’ and if you do, kick its ass.” 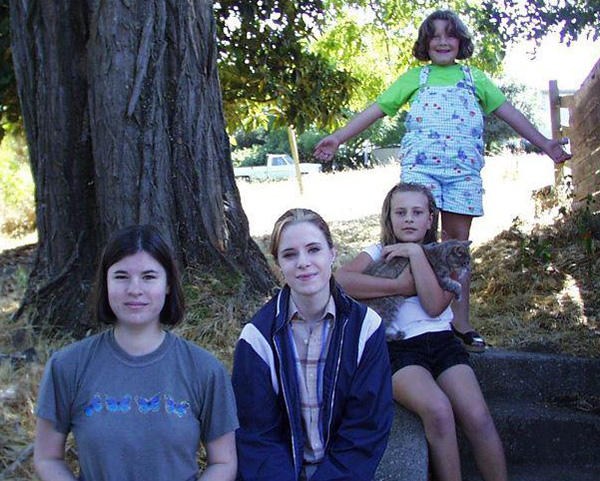 For engineering beyond imagination, we think Paloma Fautley is one very Cool Girl!

You can check out more of Paloma’s day-to-day cool goings-on through her Twitter and LinkedIn page as well as through Make.