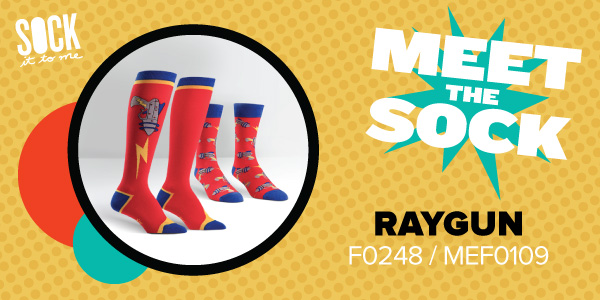 Zzzzzzap! You’re about to get hit with a knowledge ray delivered by our new Raygun socks!

Raygun: The fashion of the future. Set phasers to stun!

Raygun: A light running shoe, since you will probably be running after villains. Those, or moon shoes.

Raygun: I’ve heard legend of a small community of socks that live in outer space (https://blog.sockittome.com/the-truth-about-socks/). Someday, I’d like to join them.

SITM: Who would you not want get into a shootout with?

Raygun: Myself. That’s right, I come in men’s crew and women’s knee high and I’m no match for myself.