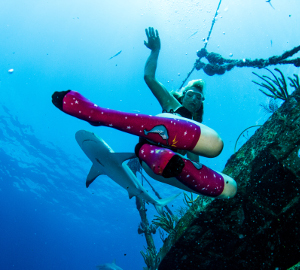 Imagine a mermaid who makes friends with sharks and you’ve got Liz Parkinson! No ordinary water-baby, this South Africa native spends her days educating the public about protecting her toothy marine pals while freediving and producing for Stuart Cove’s Dive Bahamas.

As a college student on a swimming scholarship, Liz obtained her Open Water SCUBA certification with some of her teammates. It was then that her initial love of diving was spawned, to manifest as freediving a few years later with Performance Freediving duo Kirk and Mandy-Rae Krack.

Freediving, unlike SCUBA, relies on holding one’s breath and acclimating to the environment as you dive, without the heavy tanks and equipment usually associated with underwater exploration.

As for the allure beyond the adventure, Liz explains, “Freediving for me is the ultimate way to be underwater. It really allows you to be fully exposed. It challenges me and at the same time is all consuming, engulfing me in an environment that heightens my awareness both to myself, and what’s around me.”

Beyond her work with Stuart Cove, Liz is a part of Project AWARE, a non-profit organization that aims to protect the ocean with the aid of divers. Two of their main issues that are close to Liz’s heart are “Sharks in Peril” and “Marine Debris.” Liz elaborates on what it means to defend the often-feared and commonly misunderstood predator.

“To help save sharks all you have to do is want to. There are many ways in which you can help. I jumped out of my comfort zone to try a different angle in fundraising and driving attention to a cause I deeply care for.” She adds, “If anyone out there is interested let me know!” 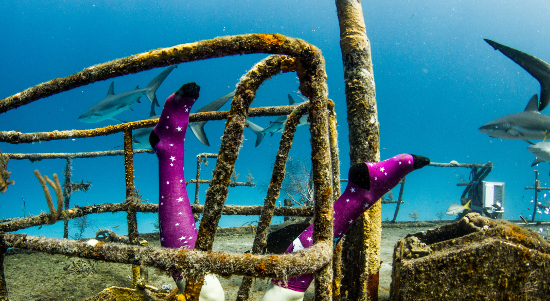 But what about danger? Isn’t there a risk when it comes to diving with creatures usually associated with Stephen King horror stories and news-breaking attacks? After all, diving is the type of thing where, in its essence, you are literally one with the water, at its mercy in its grandeur…

“There is always a certain danger level when you work with wild animals,” Liz says, “And doing that underwater does increase this, however, I never dive alone. At Stuart Cove’s Dive Bahamas we have a great crew and underwater support team. They are trained to work with our different shark species and can adapt to all types of scenario’s underwater. If things ever get out of hand we just get out of the water until we feel that it is safe to get back in.”

This sort of level-headed and respectful approach is what has allowed Liz to do things like take a ten-year-old boy diving on a Stuart Cove shark dive.

“I have never seen someone so excited in all my life,” she remembers. “It brings a smile to my face every time I think of how mesmerized and enthralled he was to be so close to the sharks. I guess it is not so much the experiences I get but those that I can give to others, especially kids. The generations following mine are going to have to work even harder to project our oceans, which we have made so fragile.”

Recently Liz has been devoting her time to helping plan the World Record Attempt in 2016 at Stuart Cove.

“A Kuwaiti lady, Ms. Reem Aleidan, is attempting the longest underwater SCUBA dive and shark dive, off the southwestern point of New Providence. She is doing this to bring awareness to both Women’s Rights in the Middle East and Shark Awareness,” Liz says. It’s this sort of public awareness campaign that unites Liz’s love for our oceans with causes that touch so many lives beyond the waves.

For her tireless efforts to dredge up ocean awareness and save our sharks, we at Sock It to Me say that Liz Parkinson, along with her shark friends, are coolness distilled!