Emily Corso is a female mixed martial arts (MMA) maven who has transcended the fighting field with her determination, grit, and a passionate approach to the whole of the sport.

Her future in fighting was sparked by a self-defense class she took in college. Inspired by the jiu jitsu aspects of the course and having become fascinated by the techniques beyond their practical application, she joined a gym. There a coach asked her to take an MMA fight.

“I was hesitant, I had been doing MMA just for fun and only for a few months at that time, but I decided to do it,” she explains. “When I won that first fight, it was much easier to say yes to the next fight offers that came along. It was always a hobby, if a bit of an obsessive one, until about a year ago when I started to think about making MMA into my day job.”

As a serious, professionally-minded fighter, her mornings begin at the gym…working! After her shift is over, she does her strength and conditioning workout before heading home. In the evening, it’s back to the gym, this time Gracie Barra, her “home base.” There she commits anywhere between two to four hours to training per day. The rest of her time is filled with putting together sponsorship materials, writing, or working a second job at the Portland Art Museum…quite a different gig than getting in the ring! So how does she handle her seemingly divided double-life? 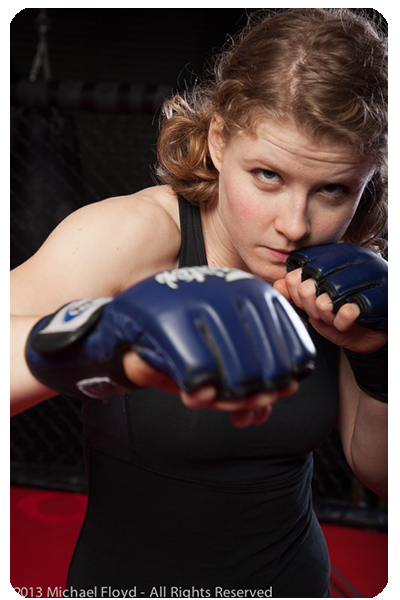 “I make a point to let new people – coworkers, friends, doctors – know pretty quickly that, if they see me on a regular basis, I may occasionally be a bit roughed up. I don’t want anyone to get the wrong idea about where my injuries come from…and I’ve been asked those awkward questions! Also, I often just can’t stop gushing about my love of MMA,” she swoons.

When I won that first fight, it was much easier to say yes to the next fight offers that came along. It was always a hobby, if a bit of an obsessive one, until about a year ago when I started to think about making MMA into my day job.

Even though MMA has a reputation for being rough ‘n tumble, and she may have a bump or scratch or two, Emily doesn’t have weekly hospital visits on her list of things to do.

“I get scrapes and bruises, occasional broken toes, and a fair number of joint injuries, but that’s about it. I get hurt much more frequently and significantly during practice than during competition,” she explains. “Then again, my opponents in the cage are 125lb women, but my training partners are primarily 155lb to 230lb men.”

She credits these partners, along with her coach, Nick Gilardi, for helping motivate her to surpass her perceived limits, both physically and professionally.

“Nick is always looking out for me and my teammates. He pushes us to be our best, overcome our fears and shortcomings, train our hardest, and treat each other with respect. I am so lucky to always have him in my corner,” she says.

As a fighter who has only suffered one loss, Emily has learned that the hardest efforts often occur outside of the cage.

“Making the leap from doing MMA as a sideline and trying to make it into a “real” career will take a lot of work,” she admits. “Sometimes I feel like I am reinventing the wheel trying to figure out how to do all these little things, like set up a website, figure out how to get logos printed on my shorts or even just get my diet dialed-in just right. But I’ve always loved a challenge and I feel like every step brings me just that much closer,” she says with a smile.

As she plans on officially going professional in early 2014, her progress can be charted online at emilycorso.wordpress.com, and on her Facebook page,facebook.com/EmilyCorsoMMA

“My other big project is seeking speaking opportunities and MMA sponsorships so I always just like to put that out there in case anyone is interested in helping,” Emily adds.

For beating down gender stereotypes when it comes to MMA, and taking the plunge to go pro, we salute Emily Corso as a very Cool Girl!