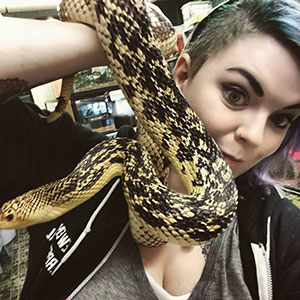 Hillary Chandanais was heated about cold-blooded animals and artistic expression from a very young age. As a child, she was set on exactly what sort of occupation she wanted.

“I knew I wanted to do anything relating to art or professional bullfrog catcher, which I didn’t know wasn’t a profession at the time,” she recalls.

After taking all of the elective art classes she could take in high-school, including pottery and classical painting, Hillary knew she wanted to further pursue art in college. She began her academic studies in Fashion Design, since she was a longtime lover of sewing and cross-stitching.

“However, I learned after a year in college that I was in love with the computer application of design rather than actually putting bits of fabric together in a professional setting,” Hillary says. “I was absolutely fascinated by the tricks and tips that come with Photoshop, Illustrator and InDesign; that these programs can transform your world and what you see through simple adjustments. When I got my internship at a New England based record store’s home office, I finally realized that there was really a whole industry dedicated to what I enjoy doing.”

Ever since, Hillary has made her passion a career. She now works as a graphic designer for Sid Wainer & Son, a specialty food distributor, and spends her workdays making retail signs or toiling away on catalogs.

“We’ve been recently working on a label rebrand project for our retail line of our products,” she adds. “I work with a fantastic team of other graphic designers and marketing experts and we are all very supportive of one another.”

Beyond graphic design, Hillary has a pet project…literally. Considering she originally wanted to catch bullfrogs for a living, perhaps it shouldn’t come as such a surprise that she is an enthusiastic and vocal supporter of reptile preservation, education, and outreach. 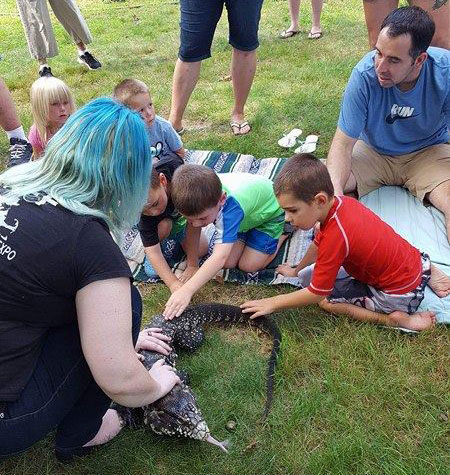 “I had a turtle as a pet growing up, and I would be regularly found in my parent’s backyard catching bullfrogs and snakes from the wetlands behind our house,” she remembers. By her senior year of college, she was brought into the herpetological community via her roommate who was studying to become a veterinary technician. This roommate took Hillary to her first reptile expo.

“I was absolutely amazed by what I saw there and I immediately wanted to be more involved with what was around me and connect with this community that I never knew existed before,” she says.

Today, Hillary and her husband Nick work at a reptile specialty shop called Cold Blooded Pets. After she wraps up her day job, they head to the shop to clean enclosures and feed a ton of hungry reptiles. She also makes it a point to educate customers about the critters they have for sale.

“The issue with reptiles is that they are misunderstood and in return are seen as scary,” she says. “I never knew how much people were afraid of animals that I adore until I started working in a reptile shop. I wanted to work towards making this is a thing of the past; making reptiles more widely accepted and less feared by humans in their native ecosystem as well as in captivity.”

Beyond the store, Hillary is on the board of the New England Herpetological Society, working as secretary. NEHS is a 501(c)(3) non-profit organization dedicated to education, conservation and the advancement of herpetology, which allows her to work against the misconceptions that plague reptiles and their owners.

“There are many bills that are being pushed by animal rights groups around the country to end animal education and even reptiles being in captivity. Working with the public and allowing them to safety interact with “exotic” animals while educating them about various species encourages the respect of native wildlife,” she says. 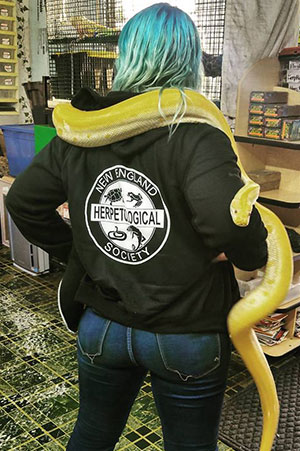 Further combining her two causes, Hillary is currently working on t-shirts, hoodies, and bumper stickers for the New England Herpetological Society, where the proceeds go back into reptile conservation and teaching the public about them. “Every day, I want to better myself, inspire more people through design, and destroy fears surrounding reptiles,” Hillary concludes.

By adding beauty to the world through design and rebranding the perception of cold blooded creatures, we think Hillary Chandanais is a very Cool Girl!