According to her mother, Jessie Oleson’s first word was “chocolate.” That says a lot, as she’s landed herself the sweet career of being the Cakespy.

Growing up in Belmar, New Jersey, Jessie didn’t just want to devour all things cocoalicious, she also dreamed of becoming a writer and illustrator. Just as with her first word, these visions of sugarplums became a reality, as she’s now a professional writer, illustrator, and gallery owner, in addition to serving up her sticky super sleuthing on CakeSpy.com.

“As early as I can remember, I was baking with my mother. And by ‘baking’ of course I mean ‘licking the spoon,’” she says.  These days she runs a “virtual dessert detective agency,” where, as the Head Spy, she stakes out sweetness in order to share it with her ever-hungry web community.

“The sweetness I share is both literal, with recipes and bakery write-ups, as well as figurative, with sweet artwork,” she explains.

Jessie greets almost every day with a buttermilk biscuit from a local bakery called Macrina, which, along with a nice walk, provides plenty of fodder for her tasty pursuits. A few days per week she enchants her customers and takes care of the technical elements inside of her store, CakeSpy Shop, which is located in Capitol Hill. 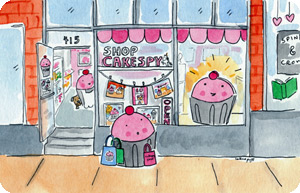 Her right-hand lady is Lily, who covers the CakeSpy Shop on the days when Jessie bakes or writes from home. Other times Jessie can be seen scoping new baked goods or bakeries on the streets of Seattle. As for the later half of the day…

Hey, Alfred Hitchcock used Hershey’s syrup as a stand-in for blood for the shower scene in Psycho. Sweetness can be found everywhere.

Jessie is currently working on her first book, and she’s a self-professed addict of gorgeous old buildings. Other things that entertain her outside of working as the CakeSpy include Christopher Gray in The New York Times, and strangers.“I consider myself an accomplished flâneur, which is an urban wanderer or people watcher,” she says. Additionally, her household holds morning meals in high esteem.

“On Sundays in particular, my husband and I pursue brunch like it’s our full time job. I zero in on Eggs Benedict, and he goes for French Toast,” she says.

Jessie hopes that her future brings more cake tourism, and that your future includes some of her often-available free cookies in her store. 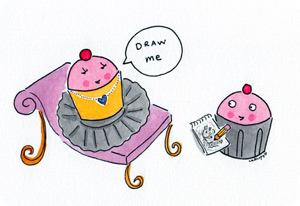 To satisfy your appetite for more CakeSpy sweetness, check out Jessie’s awesome weekly column on Serious Eats as well as her store, where she’s soon going to be debuting new underwear designs with rad patterns like cupcakes, robots, and unicorns. Her book is due out with Sasquatch Books this coming fall, and you can always check her out at CakeSpy.com and follow her on Twitter @cakespy.

“Oh, and finally, I entered this design-a-sock contest with a great company you might have heard of called Sock It To Me! and I think I should totally win,” she adds. Totally sweet!