The star of this week’s “Behind the Scenes” series is our number-crunching, letter-writing, whiz kid on the keyboard – Amber! 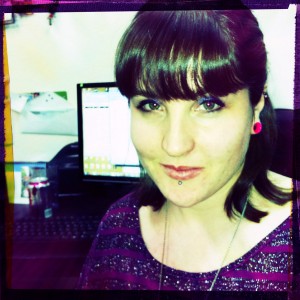 Favorite pair of SITM socks: Purple Haze is my favorite of the month.

Tell us a bit about yourself in less than 120 words: Most people think I’m weird but that’s okay. I embrace it. I am a homebody and like to do crafts, play video games, and harass my dogs Charlie & Nala. I’m doing a late night water aerobics class right now and I think that’s neat. I love sending and receiving mail. I think it’s a dying art and there is nothing like receiving a handwritten letter from a friend far away.

What were you doing before you started working at Sock It to Me? Before I started working at SITM I ran my own online business that sold kawaii Japanese stationery products. Everything was very cute and a lot of the items were totally random. After running my store for nearly 7 years I wasn’t making enough to pay the bills and I got an awesome opportunity to work for Sock It to Me part time. That turned in to full time about a year later and after trying to juggle both I finally decided to close my internet doors in 2011. I have absolutely no regrets.  I picked the winning pony.

One food item you could not live without: Burritos. Wrap anything in a tortilla and it’s better.

Where are you going when the zombie apocalypse happens? I will be meeting up with Carrie at RiteAid. She told me that was where she was going years ago and I thought it was such a great plan I am stealing it.

What sock do you wish SITM had? I wish SITM had every combination of stripes in the universe. I wear striped socks most days and coordinate them with my outfit. I’ve found the pattern ones usually make me feel over the top unless the rest of my outfit is toned down… and well, that usually isn’t the case.