We searched the entire sock fortress and collected a few geeks for this year’s Geek Pride Day. While every day at SITM is overtly geeky we wanted to call special attention to this holiday, these geeks, and come together to celebrate all the weird stuff we’re passionate about. Below you will find how being super into something can lead to independence, creativity, and challenging yourself. Don’t forget to tell us what geeky stuff you’re into in the comments!

Up until I discovered Harry Potter, there was nothing I loathed more than reading. I even went so far as to pretend to be allergic to dust in the 5th grade (fake sneezed to really sell it) so that I didn’t have to read the old books in class. I just wanted to re-read Harry Potter over and over. The wizarding world JK Rowling created filled my imagination. I was hooked. To this day (for me at least,) nothing has held up quite like Harry Potter has.

So when I met my wife, Alix, and her love for Harry Potter was on the same level as mine, I knew I had to do something special. The first HP related gift I made her was an engraved Platform 9 3/4 sign. After that, I knew I had to out-do myself for Christmas. So, I made her a kid’s book called “Alix Goes to Hogwarts.” I drew the pictures and wrote the whole thing, rhymes and all. I had it made into a hardback-bound book, so it looks like something you could buy at a bookstore. I guess she liked it. Seeing how we are now married. And we still listen to HP audiobooks on road trips. And we read HP books to each other before bed on occasion.

I have always grown up around plants, but it wasn’t until a  few years ago I decided my apartment was in need of some green and so I bought my first couple of houseplants.  One of those is still with me today! The obsession continued to grow and I now have over 30 in my apartment!

I have lost a lot of plants, but gained knowledge over the years and I think that is why I love it so much.  There is a constant learning involved, and I love that challenge.

I also love that they task me with maintaining a living organism and in turn provide me with clean air and a perfect decorating aesthetic.

The most rewarding thing is watching new growth happen and seeing them flourish!

I first became a bike geek when I joined some friends on the 2010 World Naked Bike Ride. It was such a positive, inclusive event, and I learned that you don’t have to be an athlete to ride 5-10 miles. I started riding to work occasionally, and a year later got rid of my car.

As someone who was never athletic as a kid, I love cycling because it keeps me healthy and it builds confidence as I get faster and complete longer rides. When I first started out, I thought 5 miles was a long ride; now I can ride 50 miles while loaded down with camping gear. Being able to carry everything I need for a weekend camping trip without relying on a car makes me feel strong and independent.

Choosing the right gear also brings out my inner geek, and I’m happy to tell anyone who wants to know how clipless pedals changed my life, or debate the pros and cons of panniers versus a front basket or backpack. As much as the right gear can enhance your ride though, I want beginners to know that all you really need to be a bike geek is properly inflated tires, a helmet, and a positive attitude.

In the 1980’s, a brilliant inventor and former Imagineer tinkers with the idea of turning a teddy bear into lifelike toy that can read stories and sing to children while having all the realistic emotions while doing so. Ken Forsse spent decades building and fleshing out an entire world that would match the lengths of Tolkien for this bear – no, this Illiop.

I wasn’t born when the first Teddy Ruxpins hit shelves the holiday season of 1985. Nor was I around for the release of the rest of the Worlds of Wonder line of talking toys akin to Teddy. I don’t exactly have the same nostalgia that most adults have for this bear. I was a bit too old for his relaunch in 2006. However, I always dreamed of finding an original Teddy Ruxpin someday. He was everything I love: an animatronic, a ‘bear’, and a gentle storyteller.

Now that I’m an adult with fistfuls of cash and a lot more auction scouting skills, I find a lot of broken Teddy Ruxpin, Grubby, and other Worlds of Wonder toys that people have neglected to take care of for the past thirty years. I gladly welcome each broken friend in with open arms and I’m in the process of completing a workshop to return Ken Forsse’s hard work back to life.

Hey! I’m Dre and I’m, what I call, a Sensible Sneakerhead. I’ve been fascinated by shoes ever since elementary school. I love how one seemingly small piece of fashion can vary so much in style, fabric, build, shape, etc. Oh and you can’t forget that great fresh shoe smell 🤤. Even the boxes they come in can be very cool and art in itself. My current collection sits around 20-25 pairs, so not crazy, but more than many people I know. I’m also not the type of person to collect shoes just to have them. I make sure to wear them, even if it’s only a few times a year (which is how I wear my nicer/flashier shoes because it rains so much here). If I had to pick my favorites shoes that I own, I would have to say my Crimson/Black Air Force 1’s (in my hand) that I got as a gift and my White/Cement Jordan 4’s (not pictured) that I waited in line for when they rereleased them a few years ago. I’m not sure what my next shoes will be, I do need some new running shoes…but I’m sure I’ll get some soon!

I don’t remember how Bob’s Burgers came into my life but I’d like to think it was a magical, sun-shiny kind of day. In reality, I was probably just home with a cold watching TV. For this, let’s say it was the best day of my life.

Last summer, my husband and I were a part of those affected by the original episodes of Futurama getting removed from streaming. You know, those weird kids that can’t fall asleep unless Futurama is playing in the background. Thankfully Bob’s Burgers was there to help us cope with restless nights until another service picked it up. Now, we watch both!

We also found many of our friends were fans of the show so for last year’s holiday card I decided to draw it out in the same style and wished everyone a Happy Whatever because I really don’t mind what you celebrate, just as long as there’s food.

As my love for this show started to grow I developed a strange side effect; I became obsessed with collecting Kuchi Kopis. I mean, I’ve also got a Tina POP!, real burger recipe cards, shirts, OutNerdMe posters…so many things. But I needed Louise’s favorite toy and signing up for something that rhymes with “shmoot shmrate” was no help at all! They sent me a real Kuchi Kopi toy that lights up! I knew he couldn’t just sit around looking wall-eyed and adorable and so I burdened him with glorious purpose. He now gets placed in random spots throughout my home to surprise my husband and guests. Kuchi has hid in many places; around the corner in the bathroom, up in the pot hanger with his friend Xenie (the facehugger), in plants, in the middle of the hall you just walked down staring back at you…the possibilities are endless and I can’t stop myself. I WILL NEVER STOP! THIS IS ME NOW!

Now it’s your turn!
What do you geek out about? 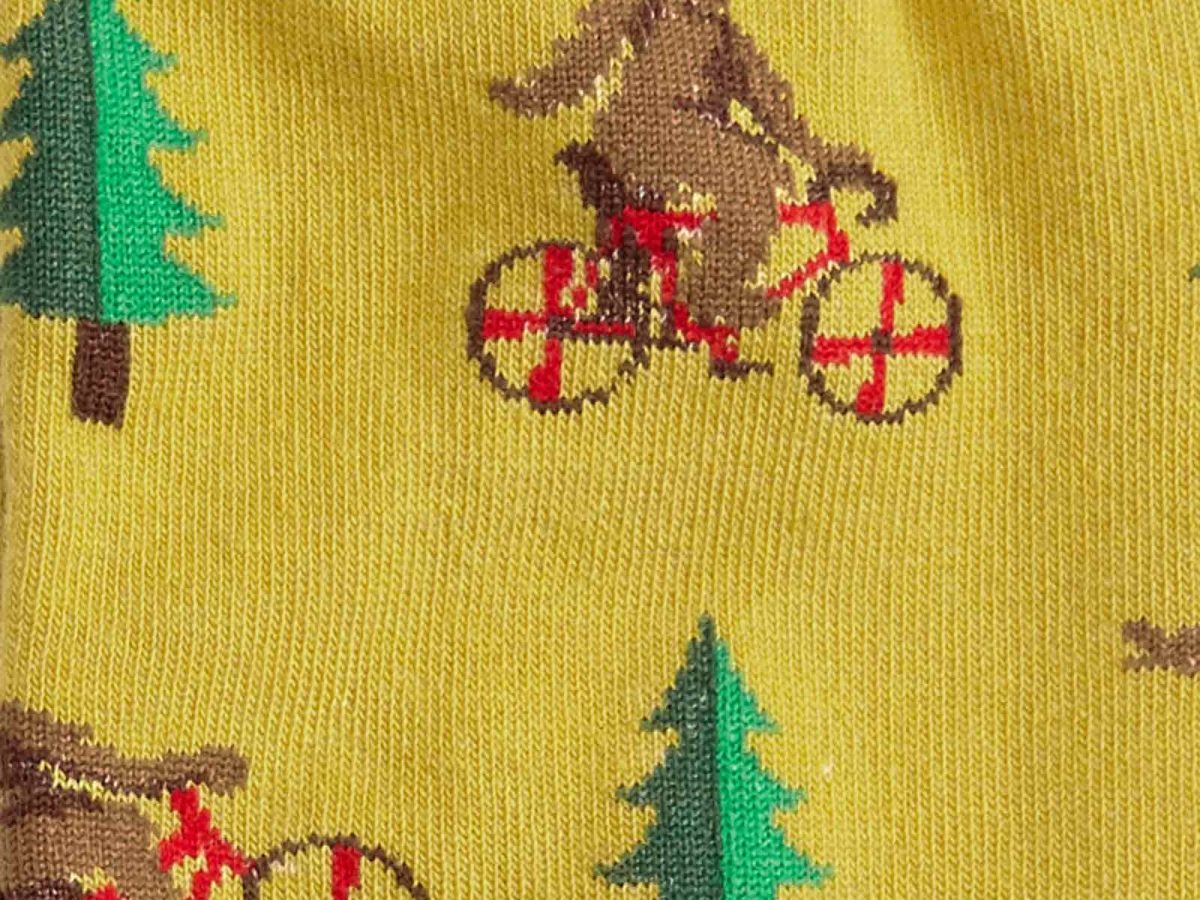 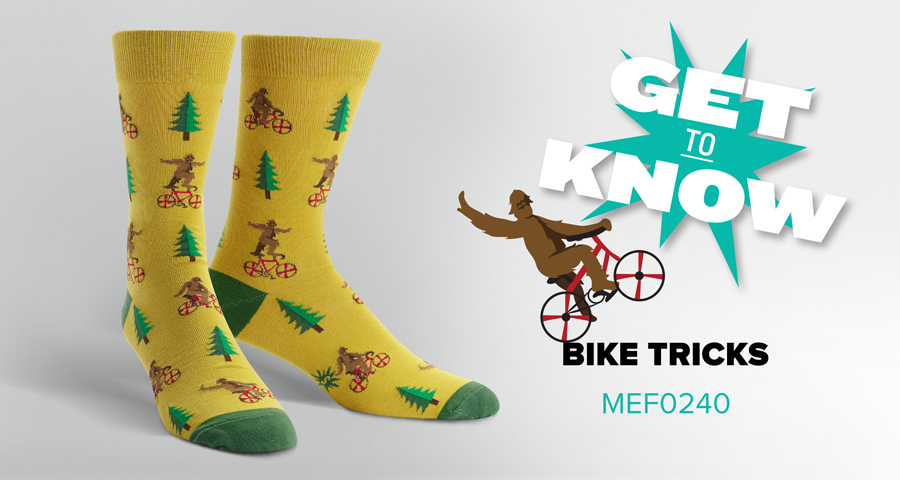 SITM: What other SITM style do you think you pair well with?

Bike Tricks: There are other Bigfoot and bike styles, but I’m more of a loaner. When we see each other, we just nod to say “hi”.

Bike Tricks: I have really big feet that help me do bike tricks some others can’t. That’s pretty cool.

SITM: What’s your favorite part of being on the SITM team?

SITM: What do you think about this sock & sandal trend?

Bike Tricks: I don’t like biking in sandals, they just get in the way. Bare feet help have a better grip.

SITM: When you’re on a foot, where would you like to go?

Bike Tricks: I don’t like to go out much, so if we do, make sure it’s quick and blurry.

Ready to ride with Bike Tricks? 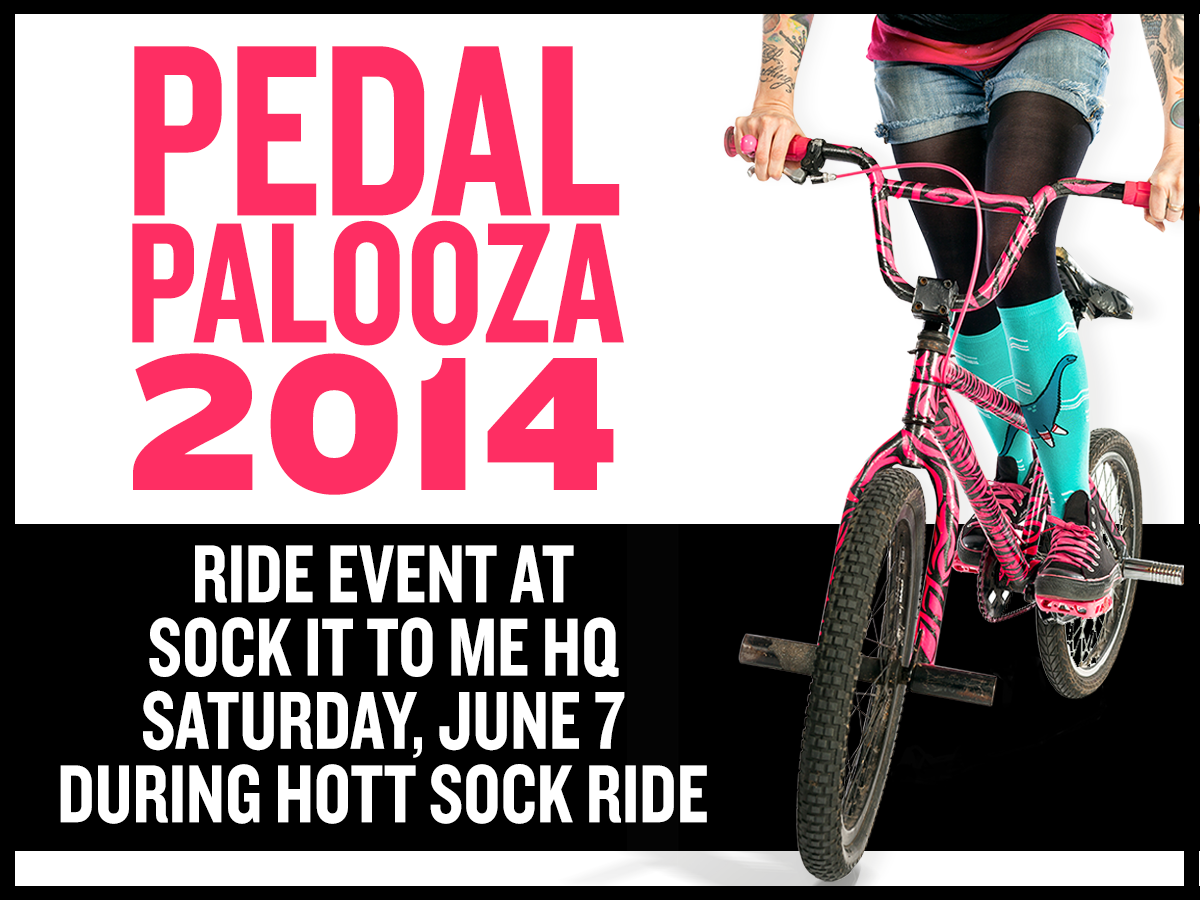 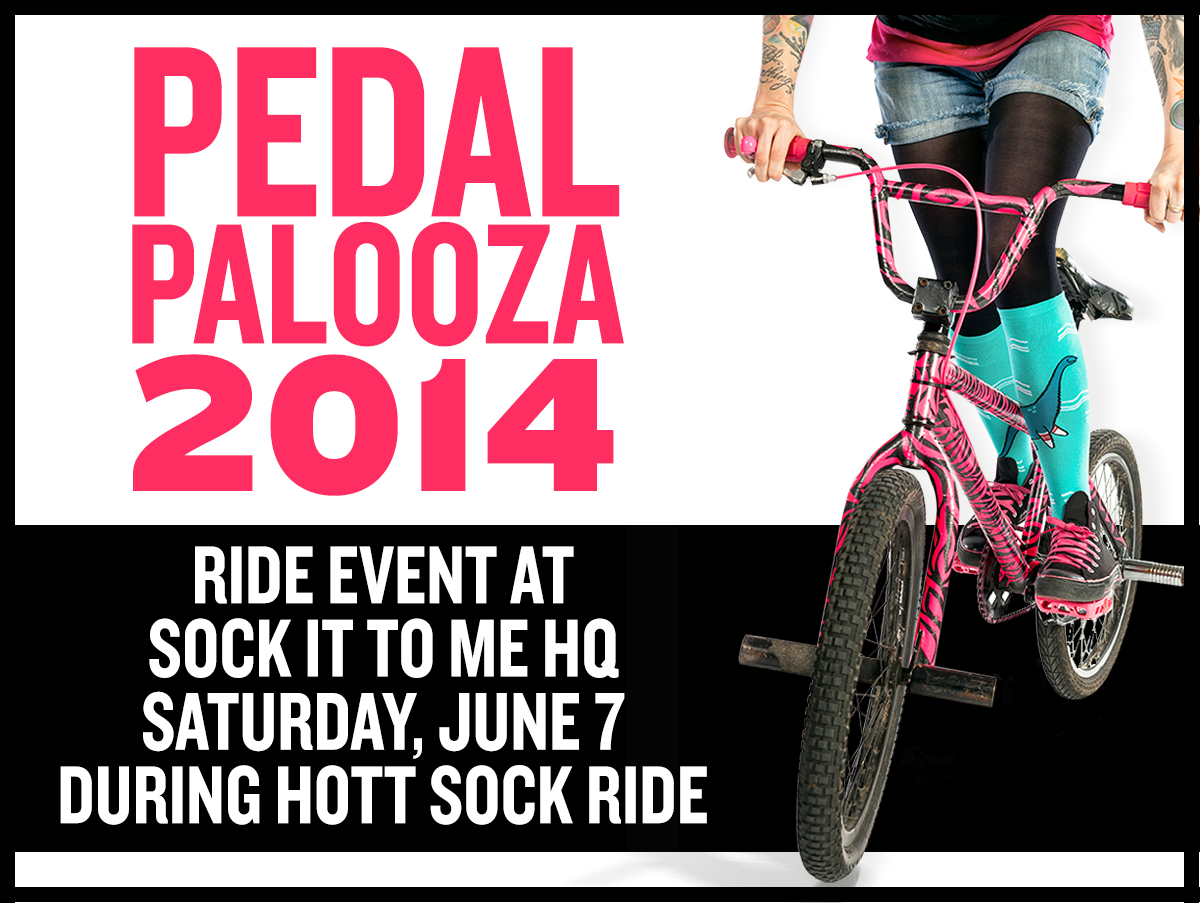 For the past 5 years, we’ve teamed up with Sock Dreams to help host an event during Pedalpalooza called the Hott Sock Ride. Sock Dreams will host part of the ride on Saturday, June 7 with some refreshments and fun, then will lead the bikers to our Sock It To Me headquarters for more fun times (and the chance to win some funky socks)!

Below are all the details you’ll need to participate this year in the Hott Sock Ride:
Where to Meet to Start: SE Salmon St + Eastbank Esplanade Take Trimet
When: Saturday, June 7 at 5:00pm
What Should You Do: Deck your calves, throw on those over-the-knees, or bare your ankles if you dare and join the sockies for a ride with great fashion and festivities thanks to local bike-loving retailers. Bring sock-funds for sock-fun (keep your legs warm on the WNBR!), pack a lock + lights, and join us at Vera (statue) at 5ish, leave at 5:15. We’ll revel with the fine crew of Sock Dreams in Sellwood, take our kicks over to Sock It To Me, and have other ped(al)-based fun along the way. See you at Vera! (Easy pace, loop-ish, mostly flat, SE to Sellwood.)

Come hang out with us & have a great time this Saturday!

Plus, we live in Portland, and biking is to Portland as igloos are to the North Pole. They just go together. More than that, biking has become our identity. So of course we were upset when that identity was recently robbed by Minneapolis, who overthrew Portland as the “Best Bike-Friendly City” in Bicycling magazine’s annual list of pro-cycle cities. Well, the 2010 results have only encouraged us Portlanders to do everything we can to earn back our #1 spot next year. Personally speaking, I think it’s time to pull out all the stops and go for fashion bonus points. (Because style wins ’em over every time!)

Well, I found this flippin gorgeous helmet manufacturer who scored huge in my book for re-thinking a market that so needs some fashion love. I mean, come on, helmets are perhaps the ugliest thing I’ve ever adorned. How do you expect me to wear one without putting up a fight? (NOTE: I advocate protecting the noggin’ at all costs… no matter how ugly it can be.)

So thank you, Yakkay, for creating something pretty for us. I truly adore this helmet, the “Tokyo” style. It’s just precious:

And I also love the “Paris”… it’s uber hip and sexy, with everyday appeal and wear-ability:

I would also argue that there is a too-far-gone extreme to this fashion-forward helmet business. It looks something like this. I’m speechless… From me (Becky) to you (general public), please don’t go too far, like this. But don’t take yourself too seriously, either. Just have fun (in a style-setter kind-of way).